Merriweather is a rising senior at DHS, and has been receiving offers from football programs across the country. He said what made Georgia Tech stand out the most was their academics. 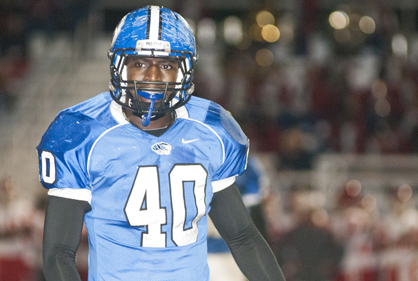 “Even though I’m going there to play football, I want to be an engineer and they’re one of the top engineering schools in the country,” he said. “The coaches were straight up with me and told me where I stand with them, and that meant a lot to me as well.”

Merriweather visited the campus this past weekend, and he said he was surprised by the experience.

“With the campus being in downtown Atlanta, I was kind of expecting it to be bizarre,” he said. “It is actually a really beautiful campus, a great atmosphere and very family-friendly.”

He said he talked it over with his parents and came to the conclusion that Georgia Tech was his best option.

“My mom and dad really liked it, and we talked about it and weighed my options,” he said. “We decided that nowhere else could offer me what Tech could with the engineering and football programs.”