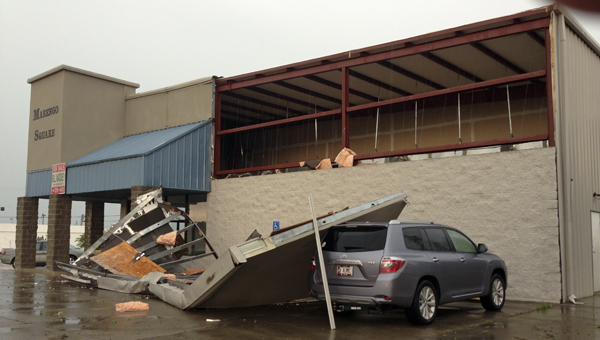 A storm with strong, straight-line winds came through Demopolis Monday afternoon, knocking down trees and damaging some buildings.

The space formerly occupied by Tootsie’s had part of the side of the building collapse during the storm.

The side of the building fell onto State Farm agent A.J. McCampbell’s unoccupied vehicle. 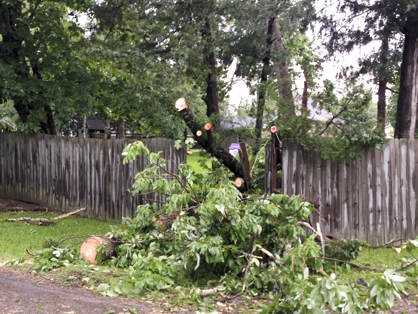 The storm knocked down trees throughout Demopolis including this one on Dogwood Drive.

Among other damage, a tree also fell across Dogwood Drive, between Marengo Drive and Powe Road, that damaged one resident’s wood fence.

The National Weather Service in Birmingham estimated the winds to be around 60 mph.

Diane Brooker with Alabama Power said there are about 500 homes and businesses in Marengo County without power as of 3:30, due in large part to a sub-station breaker being out in Gallion.

“We have crews working on it, and we will have power restored as quickly as we can,” she said.

Demopolis Fire and Rescue Chief Tommy Tate said there have been no reported injuries from the storm.

“We’ve gotten calls about downed power lines and trees, but no injuries,” he said. “The street department is out working to keep the streets clear.”