A team of competitors brought home a total of 15 trophies and swords from the forms, weapons, point sparring and kickboxing competition hosted annually by the AKC.

The wins included several first place finishes by two of Ross Martial Arts’ youngest students, Joanna Duke, 6, and Dylan Russell, 4. Both of these youngsters are part of the academy’s Tiger Cubs program, which is specially designed for children ages 4-6. 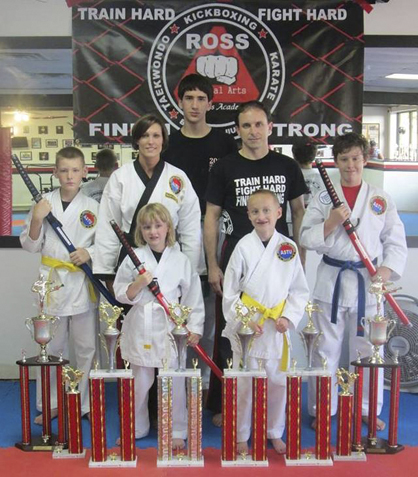 “Our little Tiger Cubs were fantastic,” Ross MA instructor Jay Russell said. “This was the first competition for both Joanna and Dylan, and it was a lot of fun to watch them get out there and show their skills.”

Russell said the Ross Fight Team led off the day’s events with the Tiger Cubs competing in open-hand forms and point sparring.

Although all of the competitors under the age of 6 received first place trophies for being able to demonstrate martial arts techniques, both Duke and Dylan Russell captured first place wins in the point sparring divisions.

“Of all our new competition team members, Sam probably had the most impressive performance for the day,” Jay Russell said. “This was his first-ever tournament, and he had a tough division with seven competitors in it. However, he defeated every opponent he faced in point sparring to claim first place.”

Russell said this tournament was the second of four scheduled AKC competitions for the year and the Ross Fight Team plans on being at every one.

He added that several team members are now in the running for state championship titles, and this would be decided at the AKC finals some time in the fall.

The team at Ross Martial Arts Academy, 1014 Highway 80 East in Demopolis, will compete again in August as its members will travel to Huntsville to compete in the Alexander Open Martial Arts Tournament.