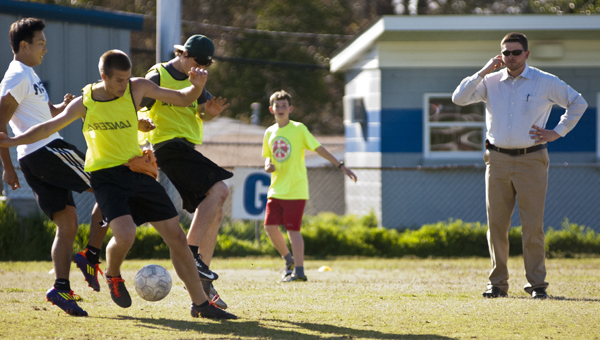 DHS soccer coach Keith Jackson looks on as his team practices during the 2013 season.

After three years as head coach and six years with the Demopolis High School soccer program, Keith Jackson has accepted a position as assistant principal at Thomasville High School.

Jackson led the team to their first area championship and their first home playoff game in 2013.

“I met with the majority of the guys earlier in the week and told them I was going to miss coaching them,” Jackson said. “I told them the program has come too far to let it decline, and they all agreed that they wanted to stay with the program. I think the program will continue to improve and that the players will continue getting better and better.”

He added that the position in Thomasville is one that he and his family have been waiting on.

“It’s the opportunity for my family that we’ve wanted,” he said. “My wife will continue to teach math here in Demopolis, because it’s what she loves to do, and I will commute.”

Demopolis High School Athletic Director Tom Causey said they are still looking for someone to come in and take his place.

“We will have the science position posted, and it will also have soccer tied into it,” Causey said. “We’re going to wait it out a couple of weeks and see what kind of response we get.”

He added that there have been a couple of recent hires with soccer experience that could also be options.

“We’re just going to see where we are in about two weeks, and make a decision from there,” he said.