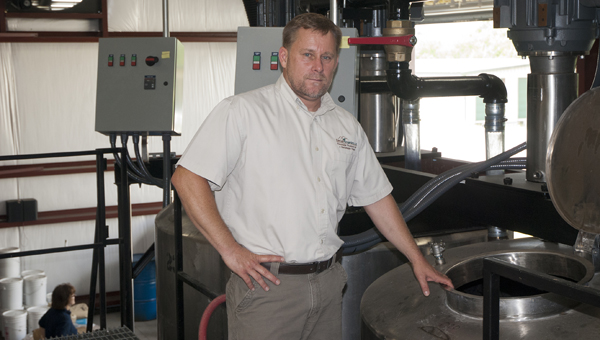 After two years of construction and testing, Denali Organics has opened its new fish hydrolysate fertilizer production plant in Demopolis in June.

Denali takes the inedible parts of catfish and breaks it down into a virtually odorless, liquid fertilizer that has tested to outperform and be more environmentally friendly than chemical fertilizers used now.

Unlike many chemical fertilizers, Lindsey added, Denali’s fertilizer actually builds up the soil and makes it better over the years.

“Chemical fertilizer never makes the soil better,” he said, “but our fertilizer builds it up. It breaks up hard soil and enhances the soil composition. It can also be applied with a sprayer instead of a spreader, so there is no new equipment a farmer would have to buy. He can use the same sprayer he already has.”

Lindsey said there are only about six companies that make similar fish fertilizer, but Denali is the only one that makes it in bulk, allowing them to keep the price low.

“In the past, this has been a niche business and the product has been very expensive to buy,” Lindsey said. “Our price to the user will be competitive with chemical fertilizers.”

Company founders Greg Mick and Scott McCormick met with the Alabama Catfish Association in 2010 to discuss the feasibility of constructing an all-natural fish fertilizer plant that could use the catfish waste from catfish processing plants. The association, Lindsey said, was enthusiastic about the project, so Mick and McCormick began looking for a central location.

“Demopolis was a logical choice,” Lindsey said. “There are active catfish processing centers in Uniontown, Eutaw and Greensboro, so this is a great location.”

Denali can produce more than 7,000 gallons of their fertilizer every day, which is more than two million gallons per year.

“We are the largest producer of this product in the world by four to five times over the next largest,” Lindsey said.

Denali’s fertilizer is typically packaged in 275-gallon totes or 55-gallon drums, but it will also be available in 5-gallon buckets and 2.5-gallon jugs.

The fertilizer can be used on any crop, and Denali can provide the amount of product necessary for different types of crops. The fertilizer can also be blended to order to meet a customer’s specific Nitrogen, Phosphorus Potassium (NPK), pH and mineral content requirements.

Denali Organics was started by Mick and McCormick in 2010 as a result of biofuels projects they had worked on in Alaska. Lindsey’s background was in building and operating biofuels plants. The three men met during a project in Alaska, and through that project, they learned how valuable fish can be to fertilizer.

Lindsey officially joined Denali in May 2011, and he and his wife, Sharon, relocated to Demopolis from Southern California.

As production ramps up at the new plant throughout the summer and fall, Denali will be looking to add jobs to help support the operation.

“We take pride in being able to support the local catfish industry by purchasing their waste and converting it into a product with such high value for local farmers,” Lindsey said.

Denali Organics is located in the South Industrial Park next to Foster Farms.

Batter Up Sports Bar and Grill September Business of the Month