Demopolis 12U All-Stars advance to semi-finals at state tournament

The Demopolis 12U All-Stars defeated Semmes 8-0 Sunday afternoon to earn a spot in the semifinals of the Cal Ripken State Baseball Tournament in Andalusia.

Henry Overmeyer went 3-for-3 with two doubles, and Wesley Allgood went 1-for-2 with a double to lead Demopolis.

Hunter Thrash struck out eight batters and allowed no runs in three innings for the win.

Demopolis faces Butler at 10 a.m. Monday in the semifinals as a result of the win.

In the second game of the tournament, Demopolis led Andalusia 4-2 at the start of the sixth inning when lightning stopped play at the tournament Saturday.

The Bulldogs got off to a rocky start, allowing Demopolis to score four first-inning runs to get in an early deficit. 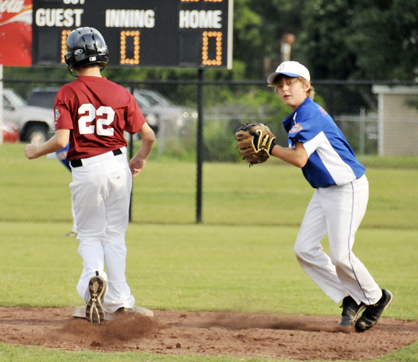 Henry Overmyer attempts a throw to first during Demopolis’ game against Andalusia on Saturday in the 12U state tournament.

Andalusia scored two runs in the top of the fourth inning and both teams were held scoreless in the fifth as dark clouds loomed over Chick Earle Field.

The lightning strike stopped the game at 7:12 p.m., sending both teams running for shelter to beat the impending rain. Tournament officials decided that since it would take a long time to get the field ready for play, it would be in the best interest of the teams to pick up play at 9 a.m. Sunday to continue pool play action.

Demopolis’ Trey Malone and Hunter Thrash were 1-for-3 each; and Jadien Isaac and Payton Geary were 1-for-2 each when play was called.

Demopolis was able to hold off Andalusia Sunday morning to secure the win and the No. 2 seed in pool play.

In their first game of the day, Demopolis faced Opp, and fell 8-4. Opp scored four runs in the first two innings and never looked back on its  lead.