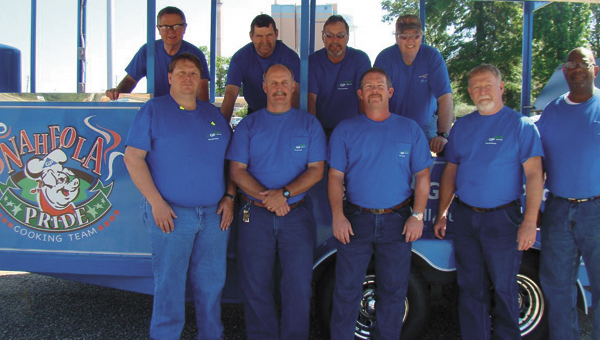 Many people enjoy outdoor grilling and licking their fingers after eating barbecue. They may not realize that May was National Barbecue Month.

Although this is an unofficial holiday, May marked the kick-off to the annual outdoor grilling season.

In addition to being known for manufacturing paper products that enhance the outdoor cooking and dining experience including absorbent Brawny paper towels, and paperboard that is manufactured into sturdy Dixie food and beverage containers, the company’s Naheola Mill in Pennington has a competitive cooking group, called the Naheola Pride Cooking Team. 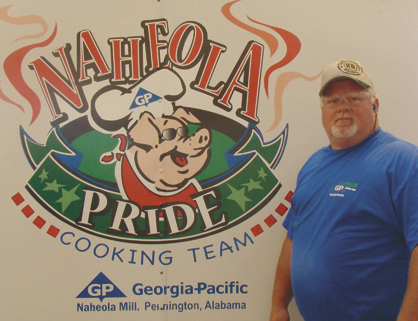 John Blocker is also a member of the Naheola Mill Pride Cooking Team.

The 10-person team creates value by serving as ambassadors for the mill during cooking competitions, humanitarian activities, and at special events preparing barbecue meals, including pork, chicken, ribs, pork and beans, corn and other foods for employees and their families during company-supported events or causes.

So far this year, the team served more than 500 employees during the CEO Safety Excellence Award ceremony and more than 200 employees and family members participating at the annual Fish-N-Fun tournament held in Camden.

Team member Tony Jackson, mechanic in the maintenance department who has worked at Naheola Mill for 29 years, explained how the cooking team was started.

“Our first cooking competition was the ButlerFest Memphis-in-May  sanctioned cook-off. Retired electrician and one of the original team members, Bobby Davis, was asked by mill management to put a team together because Bobby initially led a successful cooking team in Demopolis,” said Jackson. “Under Bobby’s leadership, we won first place in 2004 in the whole hog category.”

In addition to participating in competitions sanctioned by the Memphis Barbeque Network and Kansas City Barbeque Society, the Naheola Pride Cooking Team used their culinary talents in support of critical humanitarian projects.

In 2005, the team traveled to Waveland and Diamondhead in Mississippi to provide hot meals to approximately 200 volunteers assisting the Mississippi Gulf Coast Work Mission during the Hurricane Katrina recovery effort.

In 2006, the team placed in the 36th among 100 cooking teams competing in the Barbeque Cook-off and Hog Wild Festival benefiting United Cerebral Palsy of Mobile. The following year, at ButlerFest, the cooking team was a finalist, finishing in third place in the Rib category.

Additional symbols of team success are stored inside the trophy case at the Naheola Mill in Pennington that reflect a string of strong showings at ButlerFest competing under Memphis BBQ Network rules.

The team competed in the HamJam Arts Festival in 2010. This event is held every third weekend in April, and is said to be the largest promotional event in Philadelphia, Miss. Here, the team’s ribs earned them a fifth-place finish.  And in 2012, the team placed 10th in the Barbecued Pork category at the Battle of Brandon BBQ Challenge Mississippi State Championship.

According to team member Jackson, the secret to the team’s success is to cook at low temperatures and slow, over several hours.

For the Naheola Pride Cooking Team, to produce a good product in competitive matches, you have to be patient while cooking the meat low and slow, along the lines of 220-240 degrees over several hours, spanning nearly a full-day and half-day for pork shoulder and ribs respectively.

“(We) don’t like to rush it and you’re less apt to burn food. Better flavor through and through the slower you cook it,” said Jackson. “You can cook things like hamburgers, hotdogs, and steak hot and fast. And, (you) can cook barbecue ribs in two to three hours, but that’s not our way of doing it.”

The Naheola Mill Cooking Team was present during last year’s Christmas on the River, an event that Georgia-Pacific has supported for several years.

“A lot of the people that work at the Naheola Mill live in Demopolis and this is a great way to support our community,” Blocker said.

In addition to the Naheola Pride Cooking team in Pennington, other employee cooking teams at Georgia-Pacific are located at the following mills and specialize in various categories:  Palatka, Fla. – boiled shrimp; Port Hudson, La. – boiled crawfish; and Monticello, Miss. – fried catfish and hushpuppies.