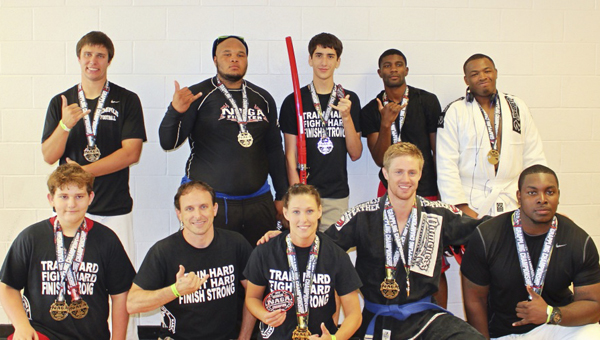 The team of 10 competitors brought home a total of 16 medals from the gi and no gi grappling competition hosted annually by NAGA.

“Every single competitor on our fight team brought home at least one medal from this event,” Ross MA instructor Jay Russell said, “and our three teammates who competed at the intermediate levels all swept their divisions, winning golds in both gi and no gi.”

Russell explained that gi grappling is Brazilian jiu jitsu competition while wearing a thick uniform. During this type of combat, competitors may use the uniform to take down, pin or even submit their opponents. No gi grappling involves most of the same techniques and strategies, however, competitors wear shorts and compression shirts and may not grab or use their opponents clothing.

Russell said Gray also claimed fourth place in gi grappling after being moved up to the intermediate division, and Morris placed second in gi grappling in his division. He added that all competitors who won first places received Georgia State Champion patches and gold medals or samurai swords.

“We were all especially proud of Daniel and Tristen,” said Russell. “Both of these guys have been competing in some tough divisions for several years now, and neither of them had ever been able to win a gold medal. This time they not only won golds; they swept their divisions.”

“In many ways, our accomplishments at this tournament were a kind of breakthrough,” Russell said. “At the next NAGA event, we could have as many as five team members who are now eligible to grapple at the expert level, which is the highest level of competition in the organization.”

Russell said that a number of the fight team members have now placed in two or more of the three NAGA events that Ross Martial Arts has attended in the Southeast division this year. He added that these standings would carry over to the next NAGA tournament his team plans on going to, the Southeast Regional Championships on Oct. 26 in Atlanta, and several of the grapplers will be competing for regional titles.

The team at Ross Martial Arts Academy, 1014 Highway 80 East in Demopolis, will spend the next few months adding to their physical conditioning, refining techniques, and competing in a few in-state grappling tournaments to prepare for the Southeast regionals later this year.