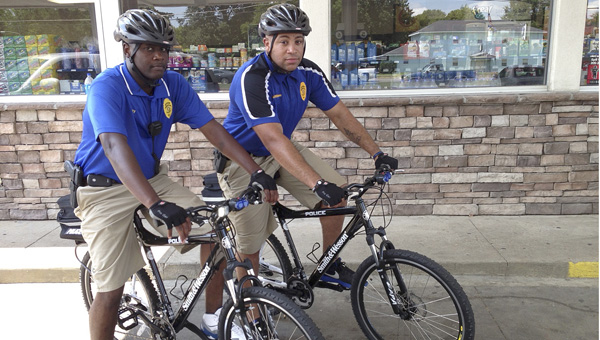 Officers William Gulley and Marcus Williams of the Demopolis Police Department use bicycles to patrol the city when they are not working as School Resource Officers.

The Demopolis Police Department has a new way of keeping city streets safe, as they recently added two bicycles to their fleet.

Officers Marcus Williams and William Gulley, who are the two School Resource Officers for the department, have been using the bikes since the end of the school year, and they said it has been good for them.

“It’s been very exciting,” Gulley said. “It keeps us in shape and it also adds the element of surprise. People love to see us on bikes because we can interact with them easier, and we can also see more of what is going on. It helps us learn new hot spots as well.”

“I love to work out,” Williams said. “That’s really been the best part about it to me. It also allows us to mingle with people more.”

DPD Chief Tommie Reese said he purchased the bikes two months ago with the SROs in mind.

“We had to find a way to utilize them while school was out, so I purchased the bikes,” Reese said. “They’ve been able to cover the entire city on them. They can interact with the public more and it makes them more approachable. It’s also two fewer cars that are using gas, so it’s saving money as well.”

Reese said that when the officers are back in the schools this fall, the bikes will still be used, weather permitting, on weekends and during special events.

“We will use the bikes during football games in the parking lots and during events like Christmas on the River and Freedom on the River,” Reese said.

Gulley said he hopes the department can add more bikes in the future to make a full shift out of them.

“There’s not a place in Demopolis that we don’t cover,” he said. “It keeps people off balance, and being able to stay in shape on the bikes really makes our jobs easier.”