One of Alabama’s former secretaries of state will serve in the position once again. On Tuesday, Gov. Robert Bentley announced he will appoint Jim Bennett to the office. 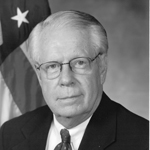 Bennett will succeed current Secretary of State Beth Chapman, who announced she would step down on July 31. Bennett’s appointment will be effective upon Chapman’s resignation.

Bentley said Bennett’s distinguished record of service made him well qualified to complete the current term as secretary of state.

“Jim is a dedicated public servant,” Governor Bentley said. “He was a trusted member of my cabinet where he served as Labor Commissioner until his retirement in 2012. Having previously served as secretary of state, Jim is uniquely qualified to lead the Secretary of State’s Office through the 2014 election cycle. I know Jim will fight for every Alabamian’s right to vote. I appreciate his willingness to serve and know he will be an honest and dedicated secretary of state.”

Bennett was appointed secretary of state in 1993 and was elected to the position in 1994 and 1998. He served as president of the National Association of Secretaries of State from 1999 to 2000. During his time as secretary of state, Bennett was an active proponent of campaign finance disclosure. He also worked to combat absentee ballot abuse and to increase the accuracy of voter rolls by making sure names of the deceased were removed.

“It is a distinct honor to return to the Secretary of State’s Office where I served for 10 years from 1993-2003,” Bennett said. “I appreciate Governor Bentley’s confidence in my ability to continue to lead the effort for honest elections and to support the opportunity for all citizens to actively participate in government through the voting process. This is especially important with the 2014 election cycle a short time ahead. To those who would seek to manipulate our most basic right to decide issues and elections fairly and honestly at the ballot box, my appointment will not come as good news.”

Bennett has served in state government for well over 30 years. He was a member of the Alabama State House of Representatives from 1978-1983 and a member of the State Senate from 1983-1993. Jim was appointed Labor Commissioner in 2003 and was re-appointed in 2006 and 2011. Bennett currently serves as Chairman of the Jacksonville State University Board of Trustees.

Bennett will not be a candidate for Secretary of State in 2014.

“Beth Chapman has done an outstanding job as Secretary of State, and I appreciate so much her public service to Alabama,” Governor Bentley said. “She has always worked hard to protect everyone’s right to vote, especially our men and women who serve in the military. I have the utmost respect for her. Her honesty and integrity are above reproach. I wish her the very best.”