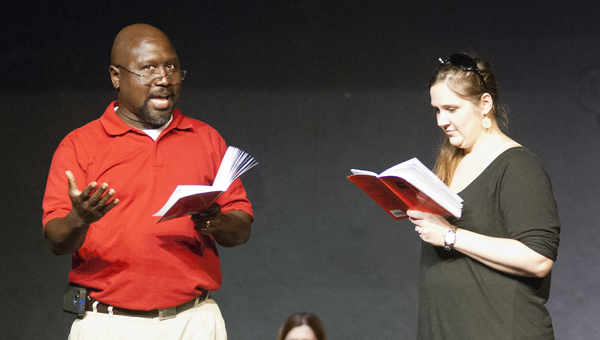 Patrick George and Laura Clements rehearse for the Canebrake Players’ production of “Return to the Forbidden Planet.”

The Canebrake Players will travel to space next month for their production of “Return to the Forbidden Planet.”

This high-spirited, campy show is full of great songs from the 50s and 60s including “Wipe Out,” “Born to Be Wild, and “Great Balls of Fire.”

Laurie Willingham is directing the musical, and Frank Calloway is serving as the production’s musical director. The show features actors and actresses ages 20 and up.

“Several of our cast members are seasoned, but this show is featuring some of our brand new members,” said Willingham. “Our cast members aren’t just from Demopolis. Some of them come from Livingston and Linden, and a few of our musicians are from as far as Butler.”

Characters and cast members include:

The cost of the show is $10 for adults, $7 for children and free for infants and toddlers.