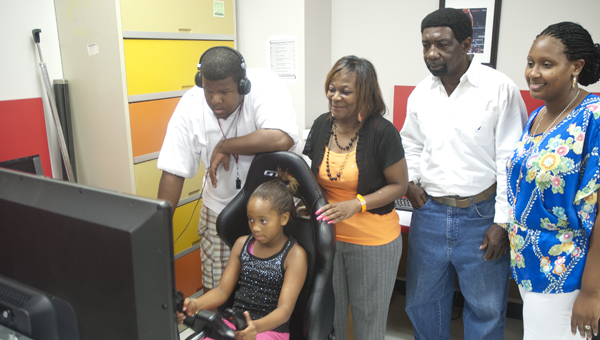 Students attending the Theo Ratliff Activity Center’s summer program this year were able to learn about aviation through a new program at the center.

The instructor of the class, Bridget Glover, said they conducted a survey at the beginning of the summer, and 90 percent of the students had never been to an airport or on an airplane.

“We decided to invest in a flight simulator machine that helps teach the students about flying airplanes and how that process works,” she said. “There are beginning, intermediate and advanced levels, and the students can work their way through the program.”

Edward Ward, who manages the Theo Ratliff Center, said the program has been fascinating for the children.

“There are so many careers associated with flight,” Ward said. “When you walk into an airport, you see hundreds of people working in there. This program familiarizes them with airplanes and what it’s like to be in contact with a control tower and many other things.”

The flight simulator program was funded through the United Way of West Alabama and the Blackbelt Foundation, according to Ward.

The flight simulators show different scenarios, including different airplanes and different runways for the students to experience.