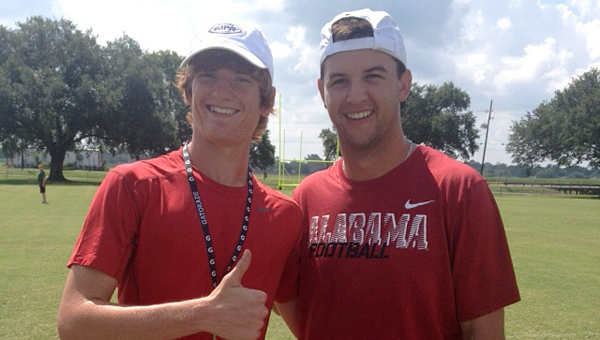 Tripp Perry, junior quarterback at Demopolis High School, attended the Manning Passing Academy in Thibodaux, La. He received instruction from AJ McCarron (right) and other quarterbacks and coaches during the camp.

Freshman Logan McVay and junior Tripp Perry spent time with quarterbacks and coaches from the college level and the professional level.

For McVay, this was his second trip to the camp. McVay’s 7-on-7 coach was Heisman Trophy winning quarterback Johnny Manziel from Texas A&M. He was also coached by Florida’s Jeff Driskel and South Carolina’s Connor Shaw during the camp, as well as Super Bowl winning quarterback Peyton Manning. 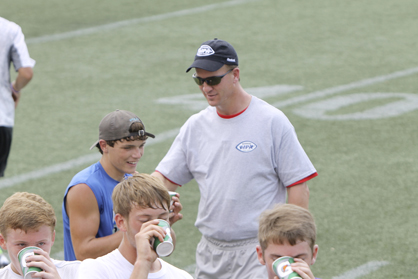 This was Perry’s first time attending the camp, and he was able to work with Alabama quarterback AJ McCarron, Seattle Seahawks Offensive Coordinator Darrell Bevell, as well as a little bit of work with Eli and Peyton Manning.

“I picked up something small every day of the camp,” Perry said. “From working on my release point to my footwork, it was a good experience.”

He added that working with players like the Manning brothers and the other quarterbacks and coaches at the camp really helped him understanding reading defenses better.

“I learned a lot about reading defenses and how to look off safeties and seeing what the cornerbacks are going to do,” he said.

McVay said getting the hands-on training with great athletes was a great experience for him.

“It was really a great experience,” McVay said. “I was able to work on my five-step and three-step drop backs, and also work on reading defenses. I think the work on both of those things are really going to help me going into the season this year.”