The Demopolis Police Department made an arrest following an attempted robbery at KFC on Saturday, July 20.

Justin Taylor Ward, according to a press release from DPD Chief Tommie Reese, entered the restaurant with his hands in his shirt asking for all of the money in the registers. When police officers arrived, Ward fled the scene. 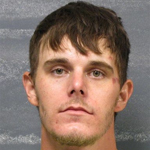 Officers found Ward hiding behind air conditioning units at the Holifield Clinic on Cedar Avenue. When he was spotted by officers, he again tried to run, but he was chased down and arrested for first-degree robbery.

Reese said he was proud of the way his patrol officers and criminal investigators handled the situation and made a quick arrest.

Ward, from Helena, is currently awaiting bond at the Marengo County Detention Center.