The city of Demopolis will host an international dog breed test event in late October.

The Armbruster Zuchtprufung, a breed test for Deutsche Drahthaar dogs, will be held at the Cattle Ranch on Oct. 29 through Nov. 2.

The breed is of German decent, and has only been in the United States since shortly after World War II when servicemen brought the dogs back from Germany. The breed itself is about 100 years old, and the dogs are known as versatile hunting dogs. They are used for water work, pointing, field work, tracking wounded game and retrieving. 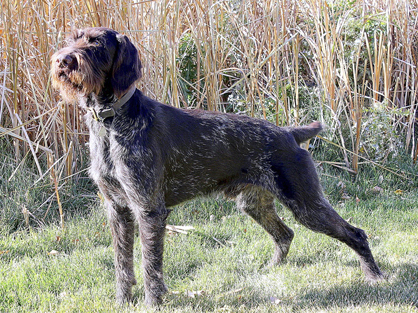 Dave Chatellier is the chairman of the Southeast Hunter Chapter of the Verein Deutsche Drahthaar Group North America. He said the dogs have to go through several tests before they can be bred, and the event in Demopolis is the second test in the three-test series.

“In order for these dogs to be bred, they have to go through three tests,” Chatellier said. “This event is the breed test, and the dogs have to do this test before they turn two years old.”

The breed test will show that the dogs are pointing and that they are able to track well.

“They will have to track a live duck on water and retrieve it, follow a blood trail, and several other tests,” Chatellier said.

The Armbruster breed test is named after Leonard Amrbruster, who was instrumental in starting the Deutsche Drahthaar organization in North America.

This will be the 13th year for the international event, and Chatellier said this is only the second time it has been in the Southeastern U.S.

“Normally the event is held out in Montana, Idaho, or places with a lot of wide open space,” he said. “These events require a lot of space because we do game drags that require 300 yards for each dog, and they must be at least 80 yards apart for each dog. We also need a pond or a lake for the water portion of the testing, and the Cattle Ranch has everything we need.”

Chatellier said he expects the show to bring around 200 people to the area from across the U.S., Canada and Europe.

He said the only problem he has encountered in Demopolis has been finding dog-friendly lodging.

“Jay Shows at the Best Western has been very good to us in allowing us to use his hotel as the flagship hotel for the event,” he said. “The Greenwood Inn is also dog-friendly, but it has been difficult to find dog-friendly places to stay. Other than that … everyone has been very gracious to us.

Verein Deutsche Drahthaar Group North America has about 1,200 members, but Chatellier said the breed is more popular in Europe and, not surprisingly, Germany.