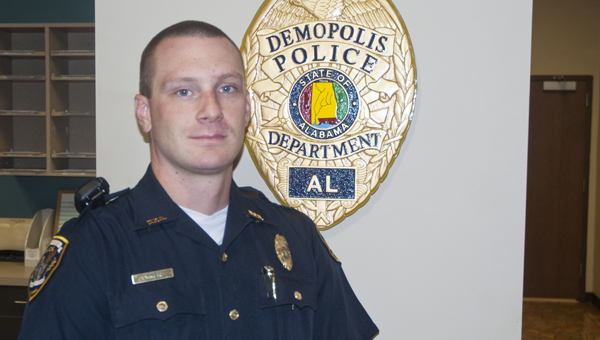 DPD officer Jonathan Sommers graduated from the police academy in Selma and earned three awards during the academy.

His awards were most improved physical training, defensive and pursuit driving and highest academic average.

Sommers said his physical training test was most improved from the first time he took it to the last time he took it, which earned him the award. The driving award was given to him because he had the fastest time on an obstacle course behind the wheel of a car. He also had the highest academic average in the graduating class with an average of 96.39.

“The academy was a really good experience,” Sommers said. “I enjoyed it. There was a lot of great training with great instructors. They do a really good job over there.”

Sommers was hired by the Demopolis Police Department on Aug. 28, 2012. He was sworn in, and went through pre-academy training with the department.

Before joining the police department, Sommers was a member of the Demopolis Fire and Rescue Squad.

“I’ve always thought about the police department,” he said. “I’m still helping the community, just in a different way. It was something I really wanted to do, and I talked with my family about it and decided it would be a good thing.”