Black bears are on the move in Alabama 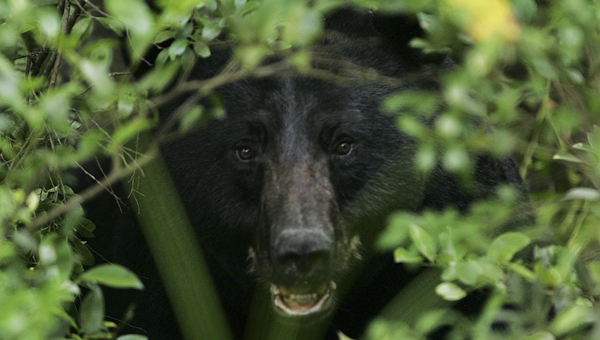 Alabama’s black bear population is relatively low but may be increasing. Photo courtesy of the U.S. Fish & Wildlife Service.

While recent black bear sightings in Lee County have some residents concerned about their safety, wildlife experts say these animals tend to avoid contact with humans. The two sightings occurred in July: the first near a subdivision in Opelika and the second near Salem, Ala., approximately 7 to 8 miles from the first sighting.

Wildlife biologists are uncertain if these sightings represent one or more different bears. A separate incident in late July saw a black bear killed after being struck by a vehicle on Highway 27 in Geneva County in south Alabama.

According to Keith Gauldin, Large Carnivore Coordinator for the Alabama Division of Wildlife and Freshwater Fisheries (WFF), the increase in sightings may indicate that bear numbers are increasing and that the animals are establishing home ranges in other regions of Alabama outside of their primary ranges.

“Changes in bear range and movements may be the result of a combination of factors such as habitat fragmentation due to residential and commercial development and a natural growth in the density of black bears,” Gauldin said. “Observing a black bear in Alabama is becoming more of a common occurrence and should not frighten citizens. If you are lucky enough to spot one, do not approach it and please report the sighting to your WFF District Wildlife Office.”

Black bears are a protected species in Alabama typically found in two distinct regions of the state. The southwest Alabama black bear population resides predominately in Mobile, Baldwin, and Washington counties, while the northeast population occurs mainly in Dekalb, Cherokee and Etowah counties. Although these areas contain the core populations of Alabama’s black bears, it is not unusual for them to be observed outside of these two regions.

During spring and summer, adult males will increase their home ranges dramatically in search of receptive females and young sub-adult bears, recently ousted from their mothers’ territory, will roam widely to establish their own home ranges. To avoid accidently attracting a bear to your home, feed pets just enough food that they can consume in one meal. Secure uneaten pet food, trash bins, bird feeders and other wildlife feeders as they are easy pickings for hungry young bears.

While bears are classified as a game animal, there is no open hunting season for black bear in Alabama.

“The black bear represents an important wildlife resource in Alabama woodlands,” Gauldin said. “Again, if you do see a black bear, don’t panic. Consider yourself lucky. You’re one of the few individuals to have experienced such a sight.”

Alabama’s black bear population is relatively low, but appears to be increasing as evidenced by the higher than normal sightings in recent years. Habitat loss, human disturbance, vehicular collisions and illegal killings are substantial obstacles that the black bear must endure to continue to sustain and increase its population levels throughout Alabama.

An informed and educated public is essential to the survival of the black bear. Additional information on Alabama black bears can be found on the Alabama Department of Conservation and Natural Resources website, www.outdooralabama.com.

To report a black bear sighting, contact your local WFF District Wildlife Office (www.outdooralabama.com/contact/), or Keith Gauldin at 251-626-5474 or keith.gauldin@dcnr.alabama.gov.