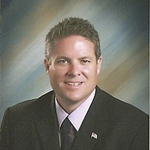 Griffin was chosen this week as his district’s top superintendent, qualifying him to compete for the state honor.

Griffin said he wanted to thank his fellow superintendents for nominating him.

“I’m very honored and I want to thank all my fellow superintendents, the Lord for getting me up each morning, my family and a lot of special friends,” Griffin said.

Griffin said the honor reflects on the entire system and is a team award.

He also wanted to thank the board of education, administrators, support staff and teachers for their work and dedication.

He said he’s proud of the accomplishments made during that time and looks forward to the future, especially technology upgrades and expanding career-tech programs.

Finalists from Alabama’s nine districts will be interviewed in October. Then2014 Alabama/Classworks Superintendent of the Year will be announced on Tuesday, Oct. 15.