‘Tiger Nation’ prepares for another season 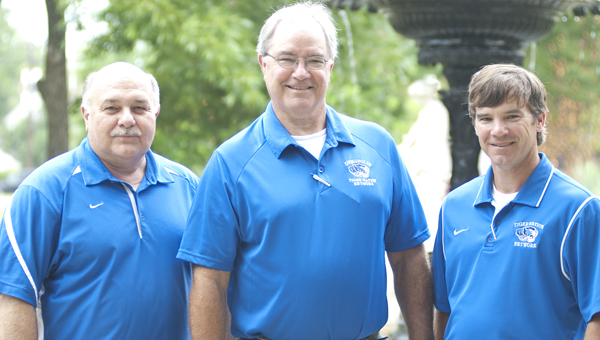 The Tiger Nation Network crew of Mike Grayson, Mike Randall and Rob Pearson is ready to tackle another season of broadcasting Demopolis High football games on the radio.

Grayson and Randall started the broadcast in 2006, which can be heard every week on WIN 95.8.

Grayson, who is also mayor of Demopolis, said he jumped at the opportunity to start the program.

“When the opportunity presented itself, Mike Randall and I were glad to help,” Grayson said. “I enjoyed the thought of covering high school football because to the players games are still games — they’re out there because they want to play, and they enjoy it.”

Randall said he saw the broadcast as a way to give back to Demopolis.

“I wanted this to be different than most sports coverage. I wanted to report the games like a parent or grandparent would like hearing,” Randall said. “If a player got hurt, I didn’t want to spout off the name and worry their family who was listening. I only wanted to report their name when they were getting up and walking away.”

After three seasons of Tiger Nation coverage, Pearson joined the team and began reporting from the sidelines.

“I saw reporting for the Tigers as a sense of pride,” Pearson said. “It was a chance to report about the players and their backstories. While we’re there to report football, what’s happening in the lives of the players is important too.”

Tiger Nation broadcasts all of Demopolis Tiger’s home and away games. No matter the location, Tiger Nation is there and the radio is blasting reports from the game.

“While reporting the games is what we’re there to do, I think we’d all agree that our favorite part of reporting is the journeying to and from the games,” Grayson said. “We enjoy catching up, eating and gossiping.”

As with any live reporting, the possibly for mishaps exists. Luckily, Tiger Nation has seldom experienced technological difficulties.

“Sometimes we get stuck behind the band and there’s not much we can do with the noise level,” Randall said. “We have fouled up once on our own though. At an away game against Chelsea we reported an entire quarter off the air.”

Though Tiger football is important to all of the members of Tiger Nation, Pearson has an even more special connection to reporting the games. His stepson Wil Stephens is a long snapper for the team.

“It’s really fun to be on the sidelines while he plays,” Pearson said. “There have been times when it’s hard to control my excitement.”

“Once, at a game against Bryant, Peyton caught an interception and ran it for a touchdown,” Pearson said. “I was so fired up I’m pretty sure I met him in the end zone.”

Not only is Tiger Nation full of pride and involved with the football team, they also donate to the high school. Tiger Nation has many sponsors that donate and help pay for the air-time on the radio.

After the air-time for the season has been paid for, Tiger Nation donates the leftover money to the school.

“We’re the first high school radio show in the state to donate our extra money to the school,” Grayson said. “It feels great to donate our time to an exciting cause and to be able to give back monetarily as well.”