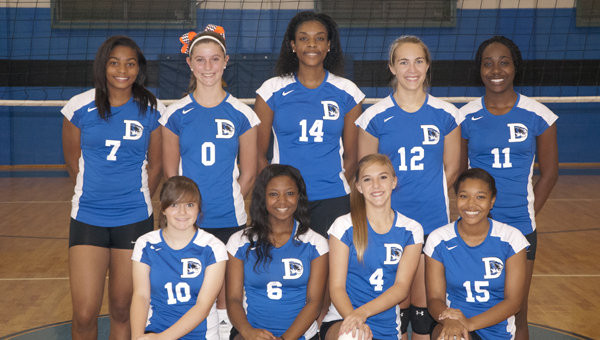 With a relatively small roster this season, Demopolis High School head volleyball coach Blythe Smith feels like this might be one of the best teams she has had in her four years as coach.

Smith only has nine players on the roster coming into the season, but she said the team chemistry is strong.

“At this point in the pre-season, we’re farther along that we have been before,” Smith said. “This team has very high potential, we just have to stay healthy.”

Caleb Washington, a junior on the team, could be Smith’s most improved player from last season.

“Caleb has made huge strides in the off-season,” Smith said. “She’s going to be our middle hitter this year, and if she’s aggressive and dominant at the net, it will change the way teams play against us.”

Washington is the tallest player on the team at six-feet, two-inches.

Smith said junior Jade Montgomery will be the team’s setter this season.

“She probably knows more about the game than anyone else on the team,” Smith said. “She will play a big role for us this season.”

“They’re always very athletic,” she said. “They will be our biggest competition in the area. I’ve never felt like either of those teams is better than we have been, but sometimes they’ve been more competitive. I think we have a shot at going undefeated in the area if we can stay healthy throughout the season.”

Demopolis will face each of their area opponents twice during the season.

There are several new teams on the schedule loaded with tri-matches this season including John Essex, ACA, Jackson and West Blocton.

“We’ve got a tough schedule this year,” Smith said. “We set our goals to win the area and have a winning season. Everybody on this team works hard, and they are a group that knows how to hustle. I’m really hopeful heading into the season.”

The 2013 DHS volleyball schedule is as follows: