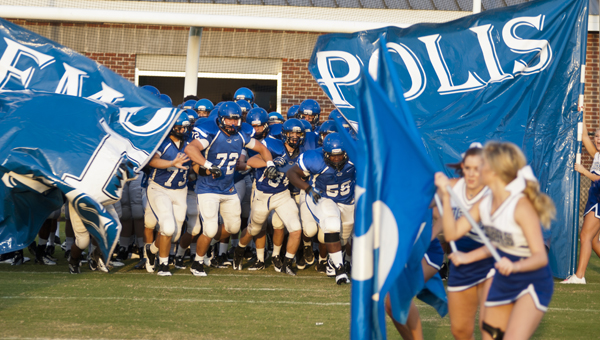 The Demopolis Tigers stepped out onto the field for the first time in 2013 in their jamboree against Sweet Water.

For the Demopolis Tigers and the Sweet Water Bulldogs, cutting down on mistakes will be a point of emphasis before the first game of the regular season next week.

The Tigers hosted the Bulldogs in a jamboree game Friday night, and the Tigers came away with a 20-14 win.

The first half was all Demopolis, as they set the tone for the game with stingy defense and big plays on offense.

The Tigers forced Sweet Water to go three-and-out on their first drive, and Demopolis answered with a five play scoring drive that ended with a 29-yard touchdown pass from Tyler Oates to Ryan Schroeder. Leif Midgorden missed the extra point, so the Tigers led 6-0 with 8:07 still to play in the first quarter. 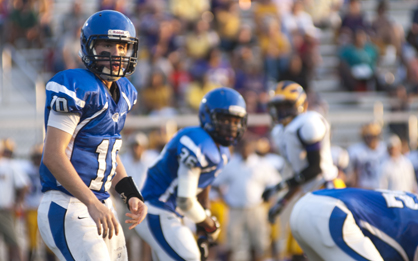 Tyler Oates gets a play call from the sidelines in Friday night’s game against Sweet Water.

Another three-and-out for the Bulldogs gave Demopolis the ball in favorable field position, but a penalty and a sack by Sweet Water’s Demarcus Gamble forced Demopolis to punt.

Neither team was able to put anything together for the rest of the first quarter, and the Tigers led 6-0 after one.

Penalties for both teams and a couple of bad snaps for Demopolis kept the game close for most of the second quarter, but a fumbled punt return by Sweet Water gave the Tigers possession of the ball on the Bulldog 38 yard line. 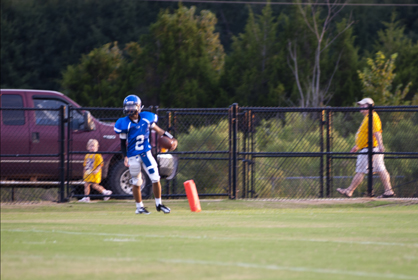 In just four plays, the Tigers punched it in on a 12-yard scamper by Roderick Davis. Midgorden converted the PAT to give Demopolis a 13-0 lead with 5:28 to go in the half.

Sweet Water put together their longest drive of the half, but it ended with a failed fourth down attempt, and Demopolis took over at their own 33 with under a minute to play.

Tyler Oates heaved the ball to the endzone, and Schroeder came down with it as time expired on the clock, giving Demopolis a 20-0 lead following the Hail Mary completion going into halftime.

“There was no excuse for that last touchdown before halftime,” Sweet Water head coach Stacy Luker said. “We got tired in the first half, but I told them to come out in the second half and be who we say we are, and that’s what we did.”

In the third quarter, Demopolis received the ball to open the half, but came out flat. Sweet Water got the ball back at their own 28 yard line and put together a 19-play drive that ate up the rest of the third quarter.

With 11:30 to play in the fourth quarter, Sweet Water got on the board with a one-yard run by Gamble to make the score 20-7.

With the second string players in, Demopolis was unable to move the ball, and backup quarterback Tripp Perry threw an interception to Markell Evans. Sweet Water didn’t convert on that drive, though, as Demopolis stopped the Bulldogs on a fourth-and-one attempt. 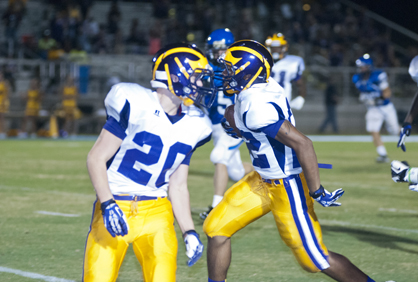 The Bulldogs got the ball back at their own 35 midway through the fourth quarter, and they drove the ball down the field to bring the game within one score.

Xavier McIntosh scored on a nine-yard run to bring the score to 20-14.

Sweet Water got the ball back one more time, but they did not try to go for the score before time expired, and the Tigers came away with the 20-14 victory.

Demopolis head coach Tom Causey said his team played well in the first half, but his second team has to play better.

“We played pretty well in the first half, but we had some bad snaps and some penalties we have to clean up,” he said. “We came out flat in the second half when we should have come out on a high, then they kept the ball the whole third quarter. Our two’s have to get better for us.”

He added that Schroeder and Dayvon Branch really stepped up to fill the hole left by the injured Demetrius Kemp (hand). Kemp’s status is still unknown, and Causey said he will be evaluated next week.

The Tigers will open their season at home next week against ACA, and Sweet Water will host Thomasville to open the season. 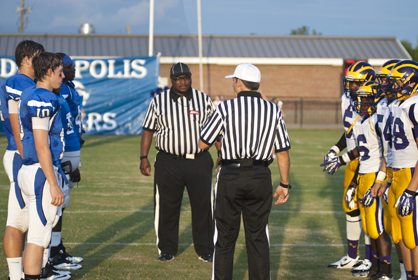 The first coin toss of the season for Demopolis and Sweet Water.