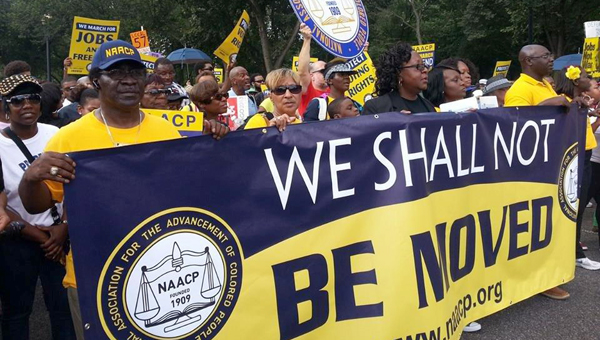 Demopolis native Dr. Charles J. Smith Sr., second person on the left with the NAACP cap on, holds the NAACP national lead banner as he participated in the historic March on Washington, D.C., on his 62nd birthday, Aug. 24. The march was to honor the 50th anniversary of Dr. Martin Luther King’s “I Have a Dream” speech.

The march on Washington, D.C., brought more than 250,000 people to the city to honor King and his dream.

“To be part of this celebration on my birthday was the best gift I could have,” he said. “It was about everything he lived, died and dreamed for.”

At the age of 13, Smith had the opportunity to shake King’s hand when he spoke at Old Morning Star Baptist Church in Demopolis.

“It was heartwarming and overwhelming to see Dr. King give a speech in Demopolis,” Smith said. “Upon completion of his speech, I was able to shake his hand as he leaned over the pulpit.”

Smith added that shaking his hand was like squeezing Charmin tissue, and to see his eyes glow was very moving and empowering.

He said meeting King at such a young age is what led him to eventually become involved in civil rights and advocate for the voiceless people in his community.

It is his belief that much has been accomplished and much work is still needed to make Dr. King’s dream become a reality, referencing the recent Supreme Court Decision to strike down Section IV of the 1965 Voting Rights Act, which he said will suppress voting.

“So much progress has been made, but we still have a long way to go,” he said. “There are some that are determined to impede the progress of everyone coming together. Voting is the most powerful voice we have to express our freedom of choice.”

Currently, Smith is serving his fifth term as president of the Augusta, Ga., branch of the National Association for the Advancement of Colored People. The Augusta branch currently has 493 active members. His branch has won several awards at the NAACP National Convention, including six NAACP National Million Dollar Club Awards and one National Club 100 Award at the most recent convention in Orlando, Fla.

In addition to his success with the NAACP, he is the current Omega Psi Phi Fraternity State Citizen of the Year and the current Georgia Retired Educators Association State Community Service Award recipient. He is a two-time winner of the NAACP Southeast Region Medgar Evers Leadership Award, and was National Chairman of the NAACP National Convention Credentials Committee in Los Angeles, Calif., then re-elected as National Chairman in 2012 in Houston, Texas.

In addition, the 118th Congress honored his unit in Augusta with recognition on the Congressional Record at the U.S. House of Representatives with an “Award of Commendations” for the success of their Annual Dr. Martin Luther King Jr. Freedom Fund Banquet.

He is married to Susie Jones Smith of Demopolis, and he is the son of the late Jim Smith and Mattie Smith-Wilson. They have two children, Charles Smith Jr. and Yashica Charnelle Smith, seven grandchildren and one great-grandson.