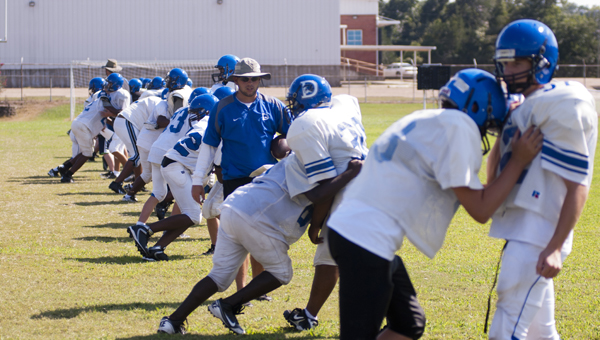 The Demopolis Middle School Tigers prepare for the 2013 season during a practice Monday afternoon. The Tigers open their season on Tuesday, Sept. 3 on the road at Sweet Water.

Coming off of a 5-2-1 season last year, the Demopolis Middle School football team is looking to improve in 2013.

Head coach Jeremy Silcox said the team can have a special year this season.

“This can be a special team,” Silcox said, “but it’s up to the guys. They have to go out there and play. We have the tools, we just have to continue getting better and executing.”

At quarterback this season, Andrew Patterson and Russ Logan will split snaps.

“Both guys have a different skill set, and we will play both of them until one wins the job over the other,” Silcox said. “If they both play well, we’ll keep both of them in there.”

DMS runs the same base offense as Demopolis High School, so the fullback position is the key position for the Tigers.

Anthony Jackson and Derrick Birl will see a majority of snaps at that position this season. At A-back, another important spot for the offense, Demetrius Davis returns for the Tigers. He saw some action last season, and Silcox said he has been doing a good job in practice so far this year.

Anchoring the offensive line for the Tigers will be Matt Dollar at center. He has experience on the line, and Silcox said he will be a key for the offense this year. Jordan Durrett will likely start at left guard, and there is still a battle for the left tackle position. Dawson Lay will start at right guard and his twin, Jackson Lay, will start at right tackle.

Backing up each position on the line except center will be Hunter Skibo. Skibo won’t start on the offensive line, but only because he is the key defensive end for the Tigers, where he will be on the field for most defensive snaps.

At the defensive tackle positions, Silcox said there are several players who will cycle in and out during the season.

The linebackers for the team are Xavier Jowers and Anthony Jackson.

Darius Birl and Davis will be the

“A lot of these guys didn’t play youth league, so this is just their first year playing,” Silcox said. “Every team we play this year is tough, so we could either be playing for the championship, or we could end up 3-4 or 4-3.”

The Tigers will open the season on Tuesday, Sept. 3 on the road against Sweet Water.

“We open with a good challenge at Sweet Water,” Silcox said. “They are always a very disciplined team.”

The DMS Tigers’ schedule is as follows:

The following are the members of the DMS football team: