Moore will run for Alabama House of Representatives

Thomas O. Moore has announced plans to run for the District 72 seat in the Alabama House of Representatives. 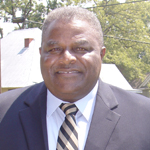 He retired from the council in 2012, saying it was time to move on and give back in other ways.

“I never did give up on politics. I just thought 20 years in one office was enough,” Moore said.

Moore said he was proud of his tenure with the Demopolis council, saying that during his time in office the city’s finances stayed in order while they were able to give city employees either annual raises or bonuses each year with no layoffs.

Moore additionally served as mayor pro-tem for his last 12 years on the council.

Moore said he believes his experiences in education, economic development and politics have prepared him for state office.

Moore was a member of the Alabama Tombigbee Regional Planning Commission from 1992 to 2001 and served as chairman in 1999-2000. In 2011, he was president of the Alabama League of Municipalities.

If elected, Moore said a top priority will be bringing jobs to the area.

He said it would be great for the area to land a large manufacturer but that he will also focus on cultivating a business atmosphere where smaller businesses can be successful.

“We need to support the mom and pop and recruit there too,” Moore said. “Then go after the 50- or 100-employee companies that can thrive and do well and pay a decent wage.”

Moore said he also wants to focus on workplace development and making sure students have options for career education.

Moore is married to Charlie Joe Moore and they have three children and one granddaughter. He is a graduate of Demopolis High School and earned a bachelor’s of science degree in accounting from the University of Alabama in 1980.

He worked as an accountant for the Perry County Board of Education from 1980 to 1985 and then as a state auditor for the Alabama Department of Revenue from 1985 to 2006.

Moore is a deacon at Morning Star Baptist Church.

Demopolis will be spilt into two districts as a result of redistricting following the 2010 Census.

Moore will run in District 72, which includes the east side of Demopolis and five additional counties. The district is currently represented by Ralph Howard of Greensboro. 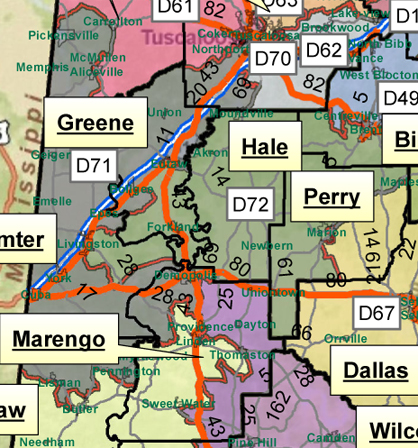 This map shows the multiple districts that Marengo County is divided into for the next 10 years. Demopolis is split between Districts 71 (gray) and 72 (green).

The districts runs west from Demopolis to Livingston in Sumter County and then back northeast, encompassing Forkland and Eutaw in Greene County, all of Hale County, Marion and the western part of Perry County and the southwestern tip of Bibb County. 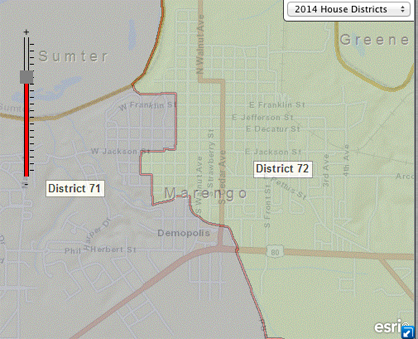 Close up of District 71/72 line through Demopolis. (Graphic from alabama.gov)

The western part of Demopolis will remain in District 71, which is currently represented by A.J. McCampbell. That district runs to west Sumter County and then up to north Greene County, southwest Pickens County and the southwest part of Tuscaloosa County.