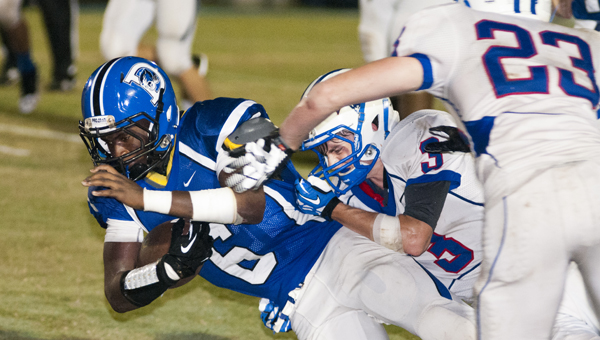 Roderick Davis led the charge for the Tigers against ACA on Friday. He had 107 yards on 13 carries for two touchdowns.

In a battle of brothers, the older brother came out on top for the second year in a row as Demopolis defeated the ACA Patriots 35-0 in the season opener.

The Tigers defense stifled the Patriots all night, allowing only 67 yards in the entire game. The defensive front, which is the strongest unit on the team, was in the backfield the entire night stopping runs behind the line of scrimmage and disrupting passing plays.

“Our defensive line was the difference,” DHS head coach Tom Causey said. “They got us the ball back quick, and we were able to capitalize.”

Penalties plagued the Tigers throughout the game, as they amassed 10 penalties for a total of 79 yards. 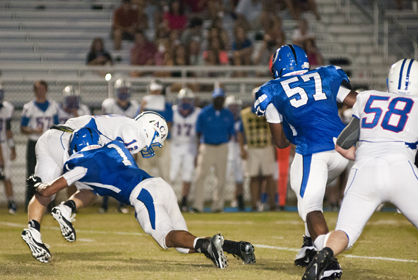 Demetrius Kemp wraps up a tackle.

“That’s mainly due to a lack of focus and discipline,” Causey said. “That’s on me.”

The most exciting play of the night for the Tigers, unfortunately, did not count. Cortez Lewis returned a punt for a 60-yard touchdown, but it was called back on a personal foul penalty.

Demopolis opened the game with the ball, but they were stopped on a fourth down conversion attempt inside Patriot territory. The Tiger defense forced a punt, and the offense capitalized on the next drive. 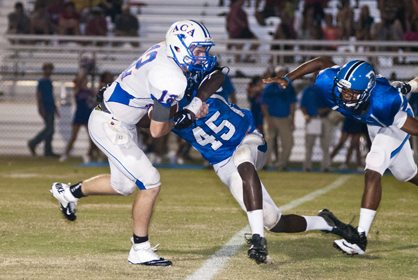 The Tigers drove the ball down the field and punched it in on a 2-yard run by Roderick Davis.

Demopolis’ second score of the game came with 8:06 on the clock in the second quarter on a 21-yard scamper from Davis, his second of the night. Davis was the leader on the ground for the Tigers with 13 carries for 107 yards.

Demetrius Kemp, who was cleared by doctors earlier in the day to play, scored the Tigers third TD of the half on a 9-yard run. Demopolis led 21-0 at halftime.

“I thought we came out sluggish in the first half,” Causey said. “ACA came out and knocked us in the mouth. They played 48 minutes, and we only played the last 24.”

In the second half, Demopolis’ defense stayed in the ACA backfield, not allowing anything on the ground or through the air. 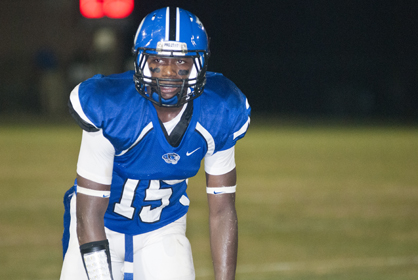 Cortez Lewis had four receptions for 79 yards. He also had a rushing touchdown.

The final score of the night came with 6:40 to go in the game when Drew Jones ran it in from four yards out.

Kicker Leif Midgorden was a perfect five-for-five on extra points.

“We’ve got to improve, which means cutting out penalties,” Causey said. “ACA came in here prepared and they never laid down. This was a hard-earned victory for us.”

Defensively, Tyler Merriweather led the way with 8 tackles, a forced fumble and a fumble recovery. 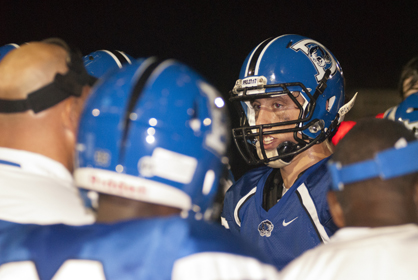 Tyler Oates gets instruction from head coach Tom Causey during a timeout.

The Tigers go on the road next week to Citronelle to open region play.