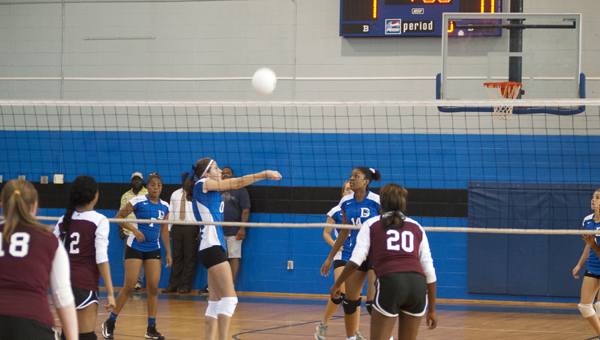 Demopolis faced Thomasville in the first match, and head coach Blythe Smith was happy with how her team performed, even though they lost two sets to none.

“Overall, for our first match, we are way ahead of where we were this time last year,” she said. “We hustled better, we attempted more hits, and played a better all-around game.”

In the first set, Thomasville jumped out to an early lead, forcing Demopolis to play catch-up throughout the set. Thomasville stretched their lead in the set to nine, leading 22-13, but Demopolis didn’t quit, as they cut the lead down to five before eventually losing the set 25-18. 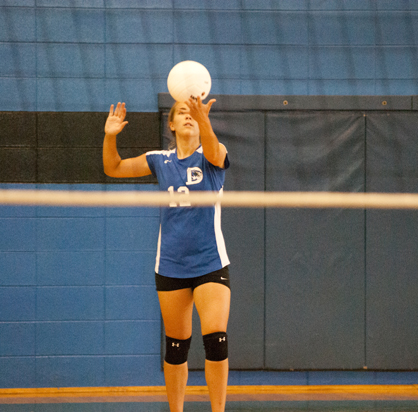 Demopolis senior Riley King gets ready to serve against Thomasville.

In the second set, Demopolis controlled the tempo for a majority of the set. Much like Thomasville in the first set, Demopolis led by as many as eight points during the set.

Trailing 17-9, Thomasville started putting together a string of good serves, keeping their composure despite trailing. They came back to tie the set at 18, and took a 19-18 lead over Demopolis.

Both teams battled to a 23-23 tie, but Thomasville was able to secure the last two points for the 25-23 win.

“In the first set, our serves hurt us,” Smith said. “We lost by seven in that set, and we probably had that many bad serves. It could have been a different game. I’m happy with our starting point though.”

Smith added that she was pleased with the play of Ivery Moore on the net and Riley King’s leadership on the court.

“Riley is a good leader and she kept the communication going throughout the match,” Smith said. “I’m looking for more consistency from the whole team as we move forward.”

In the Tigers’ second match of the night against Dallas County, the Hornets swept the Tigers two sets to none, 25-21 and 25-14.

Smith said that overall, it wasn’t a bad way to start the season, and they have now identified what parts of their game need the most work.

The Lady Tigers will be back in action at home Tuesday, Sept. 3 in a tri-match against Jackson High School and Hale County High School.