Wasson returns to Demopolis for ordination 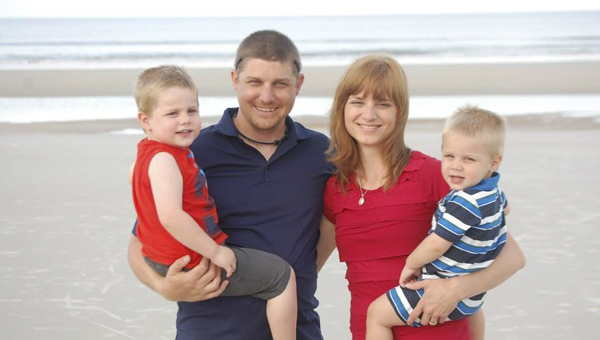 Jeremy Wasson is shown with his wife, Tiffany, and their two sons, Aaron, 4, and Austin, 2.

Jeremy Wasson, a 2001 graduate of Demopolis High School, will be ordained at the First Baptist Church of Demopolis on Sunday, Sept. 1 at 11 a.m.

Wasson moved to Demopolis when he was in the seventh grade, and he and his family were members of the First Baptist Church.

After graduation, he joined the Navy, where he spent the next 10 years. He now lives in Augusta, Ga., with his wife and two children.

“I started seminary school in February,” Wasson said. “I got out of the Navy and started feeling the calling, like I should be doing something else. I started looking into going back into the Navy as a chaplain, and that’s when I decided to go to seminary school.”

Wasson takes online classes through Luther Rice Seminary and University. He said the most difficult part of taking the classes has been balancing a full-time job, a family and the classes.

“It’s been difficult to work a full day, then go home and spend time with my boys and still have time to work on the school work,” he said, “but it’s been an eye-opening experience. There are a lot of things that I thought I knew, but I didn’t know the whole story. It’s given me a different perspective on a lot of things.”

In order to be a Navy chaplain, Wasson must first earn his degree, which he said will probably take another four-and-a-half years.

“I can only take two classes at a time because of working full-time, and when it comes time to make the decision on whether to go back into the Navy or not, it will be a family decision,” he said. “We will have to see what’s in the best interest for the family.”

He added that, right now, God has called him to go to school, and to do it in a manner that he can support his family.

Wasson said coming back to Demopolis for his ordination is a humbling experience for him.

“I made the choice to come back here to do it so I could thank the people that got me to where I am today,” he said.

“There are more people in Demopolis that would like to see me get ordained, so I decided to do it here to make it easier on everybody.”

First Baptist Church Pastor Carl Williams said he and the church are excited to be a part of Wasson’s ordination.

“We’re his home church, and we want to affirm God’s calling to him,” Williams said. “It’s good for our church to affirm his ministry, and we’re excited to be a part of it.”

Wasson has been married to his wife, Tiffany, for seven years, and they have two children: Aaron, 4, and Austin, 2.