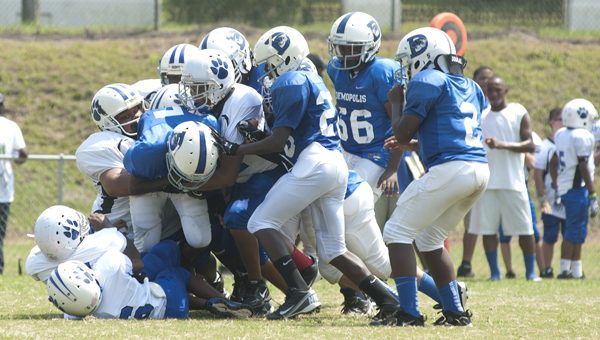 The first game of the day, the rookies, started with some big defensive plays from Jaden Blanks. He had two sacks on Northport’s first drive, giving Demopolis the ball with good field position. 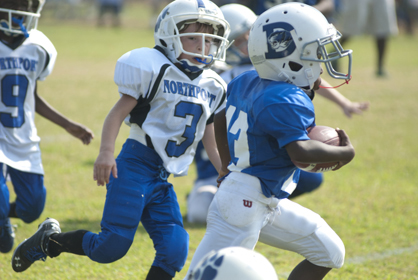 The Tigers capitalized on their first offensive possession with a 65-yard touchdown run by Mason James. James’ speed was the difference on several plays as he was able to outrun defenders.

Northport answered in the second quarter, but failed on the extra point attempt, and the Tigers led 7-6 going into halftime. 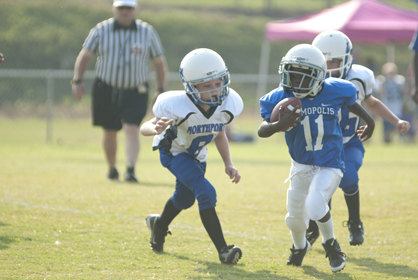 Christopher Baitey runs the ball for the Demopolis rookies. The rookies defeated Northport 14-6.

Demopolis got the ball to start the second half and they held the ball throughout the entire third quarter before turning the ball over on downs. James had two touchdown runs called back on the long drive because of holding.

Late in the fourth quarter, the Tigers extended their lead to 14-6 on a 29-yard run by Marcus Hunt. Northport didn’t have an answer, and the Tigers won the game.

In the juniors game, the Tigers scored early and often, never allowing Northport to gain any momentum.

A heavy dose of running backs Timothy Thurman II and C.J. Sandridge was the difference in the game. Thurman scored the first TD of the game from just one yard out. He set up the touchdown with a 30-yard run.

The second score of the game came on a 50-yard run by Sandridge. Demopolis failed the extra point, but led 13-0 going into the second quarter. 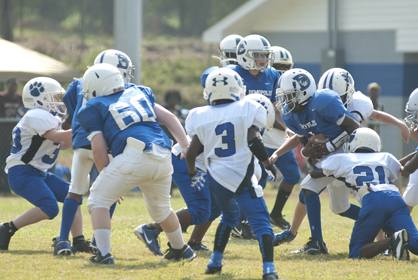 That score held until halftime. Tiger quarterback Rance Peyton Stevenson almost made a play at the end of the half to score, but he was tackled at the 2-yard line.

In the third quarter, Sandridge came down with an interception for the Tigers, and he followed it up with a 17-yard touchdown run to give his team a 19-0 lead.

On the Wildcats’ next possession, they fumbled the ball and Demopolis was able to recover. Sandridge added his third rushing TD of the morning on a 22-yard scamper, making the score 25-0.

On the first play of the fourth quarter, Brandon Franklin scored on a 4-yard run to give the Tigers a 31-0 lead.

Per West Alabama Youth League Football Association rules, a running clock is started after a team gains a 28-point advantage and the score is erased from the scoreboard.

In the final game of the morning, the Demopolis seniors came out and dominated Northport on both sides of the ball.

Northport opened the game with the ball, but the Tigers defensive line caused three straight negative plays for the Wildcats. Scott Nepo and Tyler Gamble both had tackles for loss in the possession. The Wildcats went for it on fourth down, but the pass was intercepted by Anthony Walker.

Two plays later, the Tigers scored on a 6-yard run by Antonio Besteder Jr. to give Demopolis a 7-0 lead.

The next Wildcats possession was stopped short on an interception by Tavian Brown, and Besteder Jr. added his second rushing TD of the game from 24 yards out.

Walker secured his second interception of the game on the next Northport possession, and Alexander Besteder found a hole for a 20-yard TD run, giving Demopolis a 19-0 lead.

Northport went three-and-out on their next possession, and the Tigers took over at the Wildcat 36 yard line. On the next play from scrimmage, Antonio Besteder Jr. scored on a 36-yard run.

Northport got the ball back on their own 38 yard line with a minute to go in the half, but Walker picked off his third pass of the day and took this one to the endzone.

The Tigers took a 32-0 lead going into the half, and no score was kept for the rest of the game.

The Demopolis youth football teams will be on the road next week at Greensboro.