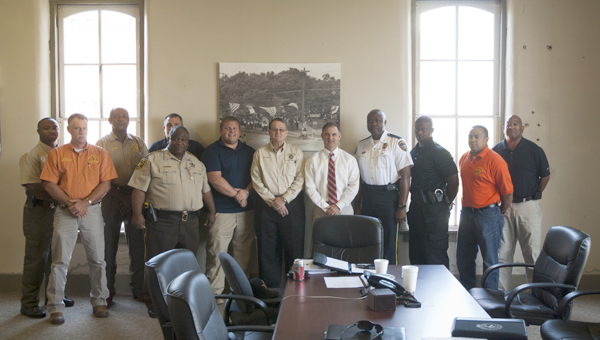 The 17th Judicial Drug Task Force, which serves Marengo, Greene and Sumter counties, will be receiving grant money from ADECA to help fund salaries and other operating costs for the agency.

A meeting was held Tuesday morning at District Attorney Greg Griggers’ office to discuss the grant with Tom Goree from the Alabama Department of Economic and Community Affairs.

The Edward Byrne Memorial Justice Assistant Grant provides funds to state and local jurisdictions. ADECA administers the grants and is responsible for the coordination between these funds and other state and local initiatives, preparation and submission of the state’s grant application.

“We’re going to get something,” task force Commander Clint Sumlin said. “We just don’t know how much yet. We received money from the grant in 2011, but not in 2012 or 2013. We can use the money for salaries, fuel, equipment or anything we need.”

Sumlin said the fuel costs alone come out to around $15,000 per agent.

“The commission will receive the money, and we have to ask them for the money when we need it,” Sumlin said. “ADECA will actually reimburse the county as we spend it.”

Goree said he cannot say how much the 17th Judicial Drug Task Force will receive because ADECA has not received their federal money yet.

“We will be able to tell you what you can receive after we receive the federal money,” he said. “We receive money based on population and crime statistics, and that’s how we appropriate it as well. I hope we’ll know within the next month, but sometimes it takes longer.”