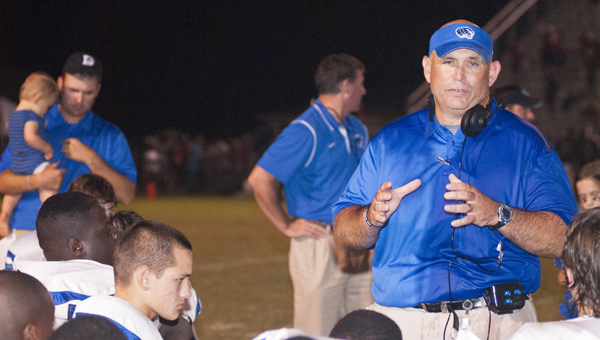 It was a tough game, the outcome of which seemed possibly in doubt when the Wildcats took at 14-7 lead into the locker room at halftime.

But a second half surge, particularly behind workhorse Roderick Davis, who finished the night with 243 rushing yards, allowed the Tigers to come back and leave Citronelle with a 31-14 win. 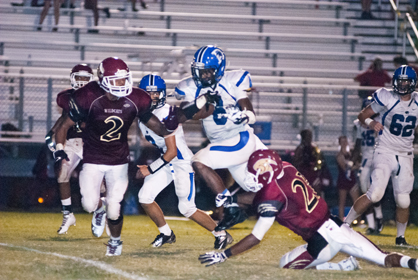 Running back Roderick Davis finished the night with 243 yards.

Causey said he hadn’t told but one player, Peyton Pearson, about what a victory would mean.

“I didn’t want anybody to know,” Causey said.

But word got around and coach got a Gatorade bath as players celebrated the milestone with him.

“That’s a big deal. It means a lot to me that the guys thought about it,” Causey said. 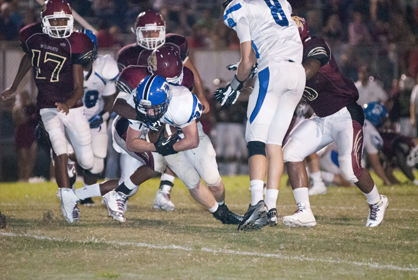 Drew Jones runs for a touchdown.

The team started strong of the gate when Cal Logan recovered an onside kick to open the game. Two plays later, Davis scored off a 24-yard pass from Tyler Oates to put DHS up 7-0.

The touchdown was Davis’ first of the night, but he would go on to score two more on the ground.

Citronelle was able to capitalize when they intercepted the ball as Demopolis looked to score. A few players later, Jeffrey Snow caught a 21-yard touchdown pass to even things 7-7.

The Wildcats scored again off a 2-yard run by Torious Fells that gave the home team a 14-7 advantage, which is where things stood at the break.

Demopolis came out on fire in the second half behind Davis and a stingy defense.

Davis scored is second touchdown of the night when he ran it in from 13 yards out on the Tigers first possession of the third quarter.

DHS quickly got the ball back and scored again, when Drew Jones bulldozed his way into the end zone for a 9-yard TD run. The score put Demopolis up 21-7.

Demopolis added more points off a 33-yard field goal by Leif Midgorden and a huge 79-yard run by Davis.

As a team, the Tigers finished with 354 rushing yards. Davis alone had 243 of those on 20 carries. They were 5-of-12 passing for 83 yards but did have two interceptions.

Citronelle was held to just 5 rushing yards after a flurry of negative plays in the second half. They fared better passing, where they were 10-of-20 for 169 yards.

On defense, Pearson led the team with 8 solo tackles, three assists, one fumble caused and one fumble recovery.