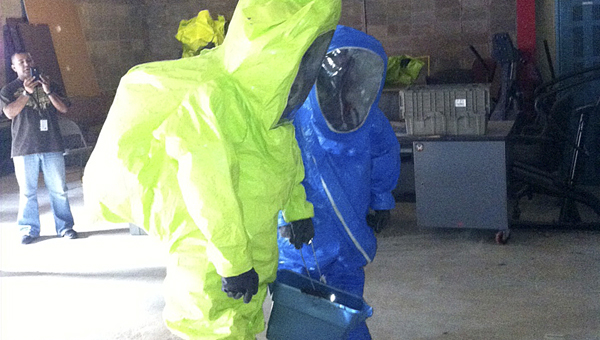 17th Judicial Drug Task Force Commander and DPD officer Cole Basinger earned their meth lab certifications recently. They are the only two officers in the area with this certification.

Clint Sumlin, commander of the 17th Judicial Drug Task Force, and Cole Basinger of the Demopolis Police Department, attended the certification course to become more knowledgeable about chemicals and what can and cannot be mixed.

“Fortunately, we don’t have many meth labs in this part of the state,” Sumlin said, “but this is also good if there’s an accident with an 18-wheeler or a train in which there is a spill.”

Sumlin said they complete the first part of the course in December 2012 and finished it in August.

“We learned what mixes with what, and what can cause a problem,” he said. “It was very technical. Now, if we get into a situation with a lab or something, we’ll know how to handle it.”

Sumlin said he can Basinger are the only two people in this area who are meth lab certified.

Sumlin added that the task force is also now Level A certified in hazardous materials.

“We plan to work with Demopolis Fire and Rescue because they have all the hazmat equipment,” he said. “We can do whatever we need to do now with this certification.”

DPD Chief Tommie Reese said he is proud of the officers for completing the course.

“I’m proud of Clint and Cole,” he said. “I hope we never have a lab here, but it’s good to know we have guys that could handle it.”