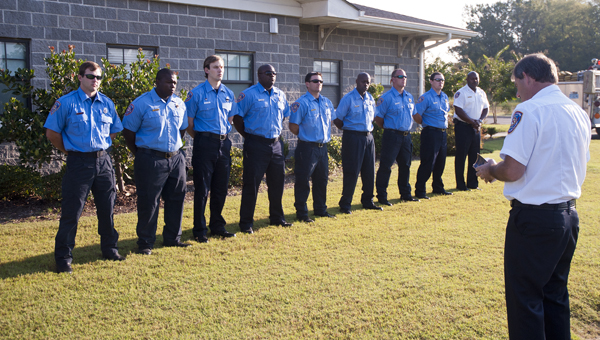 Members of Demopolis Fire and Rescue met outside Station 3 Wednesday morning to honor those lost during the Sept. 11, 2001, attacks in New York City and Washington, D.C, and the plane crash in Pennsylvania. Chief Tommy Tate spoke to some of his firefighters about the events of that day.

Members of Demopolis Fire and Rescue met Wednesday morning in front of Station 3 to honor the heroes from Sept. 11, 2001.

Chief Tommy Tate said it’s important for his department to remember that day.

“It’s very important that we remember their sacrifices and what they did that day,” he said. “Even though we’re a small department, we can still relate on some level to what they went through when we go into a fire. You never know what could happen.”

During the gathering, Tate spoke about the events of 9/11, and the timeline of when each plane hit the Twin Towers, the Pentagon and crashed in Pennsylvania.

“Remember where you were and what you were doing,” he said. “This is an important day in American history as well as the history of the fire service.”

After Tate spoke, Firefighter Forrest Harvey lowered the American flag to half-mast, and the firefighters gathered around the flagpole to pray. 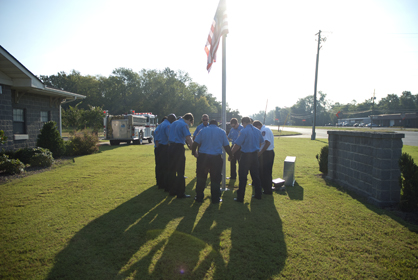 Firefighters gathered around the American flag Wednesday morning to pray and to honor those lost on Sept. 11, 2001.