This year’s annual Motor Vehicle Criminal Interdiction Training and Intelligence Conference was held in San Antonio, Texas, on Aug. 12-15, where Autery received the award and was nominated for another.

At this year’s banquet, Autery was given the Networker of the Year award. This award is presented yearly to an interdiction officer that is dependable and goes out of his or her way for other officers. Interdiction officers practice a more proactive form of traffic enforcement, looking for signs of criminal activity when a stop is made.

Along with other awards, each year an award is given out to the top interdiction officer. This year four officers were nominated from across the country and Autery was one of the nominees and received a plaque in recognition of that honor. 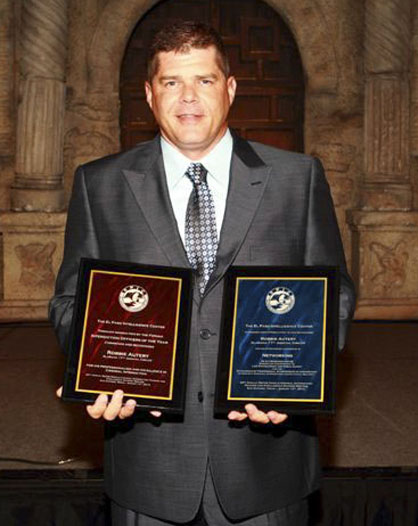 Autery began his career in law enforcement in 2003 with the Chilton County Sheriff’s Department as a Sheriff reserve. He enrolled into the police academy and graduated in March of 2005 and went to work full-time as a patrol deputy.

He served there until 2007 when he joined the Alabama Department of Public Safety as a State Trooper working routine patrol. In 2008, he accepted the responsibility as a narcotic K-9 handler and in 2009 was selected to be a member of the State Trooper’s Felony Apprehension Patrol Unit.

Autery and his K-9, Suza, led the state of Alabama in total seizures in 2009, 2010 and 2012. He has had prosecution success in federal drug trafficking and conspiracy cases in the northern, middle and southern districts of Alabama.

He also has a 100 percent conviction rate on all drug trafficking cases in both state and federal courts.

He is certified through FMCSA in North American Standard Roadside Inspection parts 1-3 as a Commercial Motor Vehicle Inspector.

In January 2011, Autery became a Certified DIAP/EPIC Instructor and continues to teach techniques relative to identifying and apprehending traveling criminals and contraband smugglers utilizing our nation’s highways to federal, state and local officers.

He was presented with the road warrior networker of the year award in 2010, and in 2012 he was earned the DIAP workhorse award and DIAP Instructor of the Year.

Since working full-time criminal interdiction, he has seized several million dollars worth of narcotics and U.S. currency off the highways of Alabama.

Autery is an active DIAP instructor, active member of Road Warrior Network and also a member of the Alabama Troopers Association.

In June of 2013, he left the Alabama State Troopers for the 17th Judicial Circuit District Attorney’s Office to develop and start a full-time criminal interdiction team where he continues to successfully work.

Each year the MVCI conference is put on by a host agency, and they commit to hosting the event that brings the best and the brightest criminal interdiction officers together in an environment optimized for learning and intelligence sharing. Efforts are made to ensure all depart the week’s training and activities having gained valuable knowledge and insight, regardless of experience or interest.

Instructors and speakers throughout the week, during both the general and breakout room sessions, deliver officer safety and rapid assessment techniques that are invaluable during roadside encounters. Twenty-nine hours of training begins on a Monday and continues through closing on a Thursday afternoon. Each year there is an awards banquet during the week for those who have excelled in criminal interdiction.