More than 10 months after kidney transplant surgery, Atlay Phillips-Nelson’s recovery is coming along as expected.

She said there have been bumps in the road, or “storms,” as she calls them, but overall, the recovery process has been great.

“The healing has been great,” she said. “Everybody heals differently, and I’ve always healed quicker than most people.” 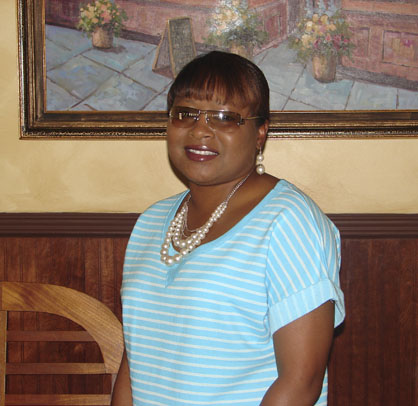 Atlay Phillips-Nelson received a kidney transplant on Nov. 3, 2012, and has been steadily improving since with only a few setbacks.

She said one of her biggest challenges has been not being able to socialize as much as she used to.

“My immune system is very low, and it’s dangerous and risky for me to come in contact with a lot of people,” she said. “For the first six months, I couldn’t go to church, and that was hard for me. I love my church family and they’ve been so supportive. I was getting sick every time I went, so my pastor told me to do what the doctors said and stay home on Sundays.”

Recently, she has run into some issues with her bladder that she and her doctors are trying to get straightened out.

“My bladder has been the biggest storm lately,” she said. “It’s the main issue we’re dealing with right now, and after we get it solved, I’m praying we’ll be past the problems. If it puts pressure on the kidney, there could be problems, so we’re trying to avoid that.”

This Saturday, Sept. 14, she has partnered with Pizza Hut for a fundraiser for her transplant fund.

“The medications are very costly, and transportation to my checkups in Atlanta costs us a lot,” she said. “Starting out, I was having to go back to Atlanta two or three times a month. Now it is at least once a month. The fund is to help get to my appointments and medicines.”

For the Pizza Hut fundraiser, any order placed Saturday using the code “1026” or “Atlay Nelson” will donate a portion of the proceeds to her fund.

For online orders, “Nelson” can be entered in the code box for the order.

“An angel provided me with the information about doing this with Pizza Hut,” she said. “I’m hoping people will order for game day Saturday. I’m calling it my game day fundraiser.”

The codes for the fundraiser will work at any Pizza Hut location in the United States, not just in Demopolis.

“I hope to expand this for anyone who is having a kidney transplant and dealing with diabetes in the future,” she said. “I want to extend it beyond me.”

She added that her experience with the transplant has been amazing because she’s been able to share her story.

“I’m thankful I’ve been able to share my story so people can see there is hope with diabetes and kidney failure,” she said. “I have a very strong faith and I knew God was with me. I knew I would be healed on the other side, and it shocked me to know I’m healed before I got there. I’m truly grateful.”