Demopolis bounces back with win over Selma 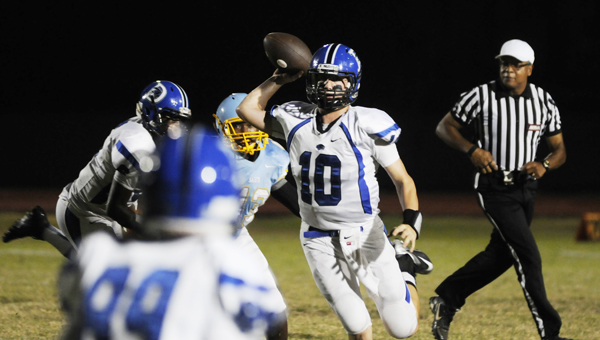 After a tough week of practice following their loss to Saraland last week, the Demopolis Tigers traveled to Selma and defeated the Saints 35-12.

“We had two grind-it-out drives in the first half, and our defense played well,” head coach Tom Causey said. “It all comes down to ‘are we willing to sacrifice for the guy next to us,’ and we did that tonight.”

The game started out with neither team gaining much ground, but Demopolis found their groove late in the first quarter.

After getting the ball in good field position at the Selma 36 yard line, the Tigers got the ball down to the 5 for a first-and-goal. Demetrius Kemp took the ensuing handoff into the endzone for the touchdown. Leif Midgorden’s PAT attempt was good, and the Tigers led 7-0 with 2:53 to play in the opening frame.

In the second quarter, Demopolis put a long drive together in which they had six first downs. Kemp scored his second rushing touchdown of the night on an 11-yard run to give his team a 14-0 lead.

Selma drove down the field on their next drive, but it looked like Demopolis was going to get a stop deep in their own territory. With 2:12 to play in the half of fourth-and-eight, Selma’s Jesse Boggs completed a pass to Lekedrich Rogers for a touchdown. The PAT was blocked by Tim Bonner, and the Tigers led 14-6. That score held until halftime.

At the half, the Saints had outgained the Tigers 145 yards to 129 yards.

“I was pleased with our performance in the first half,” Causey said. “We had some penalties that put us in long distance situations, but we played well.”

Kemp scored his third and final touchdown of the game in the third quarter on a 20-yard run to put Demopolis ahead 21-6. He finished the night with 55 yards rushing on five carries for three touchdowns. He also had four receptions for 34 yards.

As time expired in the third quarter, Roderick Davis scored his first touchdown of the game on a 4-yard run. The Tigers led 28-6 going into the fourth quarter.

Halfway through the fourth quarter, Davis reached the endzone for the second time, this time from 15-yards out, giving the Tigers a 35-6 lead.

With Demopolis’ second string defense in the game, Selma was able to put a drive together late in the game to score again. A 40-yard run by Davion Dubose brought the score to 35-12.

“We had some very physical practices this week, and it showed tonight,” Causey said. “This was a direct result of the team playing together.”

Demopolis returns home next week to take on the Thomasville Tigers.