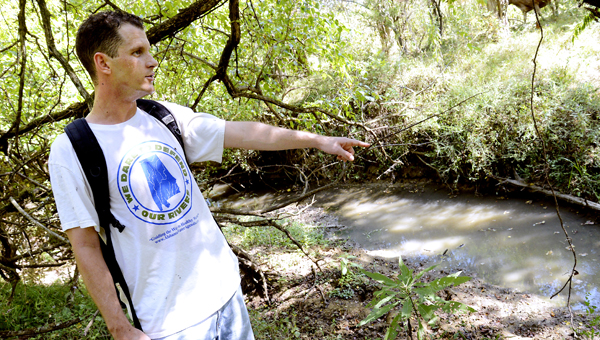 Adam Johnston, Alliance Coordinator with the Alabama River Alliance, points Thursday to a spot where waste water was leaking into Freetown Creek from the Uniontown spray field.

UNIONTOWN — Ben Eaton has lived in Uniontown for 18 years, and he said it’s been tough to get friends and family to visit with the smell — and appearance — of the nearby Freetown Creek.

“The odor alone is embarrassing when I have people visiting from out of town,” Eaton said. “And as time got on, it has only gotten worse.”

The trouble with Freetown Creek stems from leakage of sewage from a spray field that treats wastewater from the city of Uniontown.

Adam Johnston, Alliance Coordinator with the Alabama Rivers Alliance, said the design of the spray field is largely to blame for much of the problem, which has persisted in the area for years.

“Most systems treat sewage and then release it back into the stream, but here, sewage comes up and is sprayed and is supposed to go back in to the ground,” Johnston said. “But right now it is pooling up at the lower end of the property and getting into Freetown Creek.”

A little over a year ago, the Alabama Department of Environmental Management mobilized scientists to the area to document and study the areas affected by the leak — including areas along Freetown Creek and Chilatchee Creek. Shortly after the ADEM agents were on site, the city of Uniontown completed repairs to the field that ADEM later said had fixed the issue.

Johnston said that while more sewage does leak into Freetown Creek during periods of heavy rain, there is a small, yet steady amount that reaches the creek during more dry periods.

The city recently received a Rural Development grant worth over $4 million to build a new spray field, but Johnston said the location of the new spray field — even closer to a residential area in Uniontown — doesn’t give him much faith the problems will be solved.

“Once again, it’s going to be in the middle of a residential area,” Johnston said. “And if it’s designed like the old one is, it’s going to affect the neighbors and the community around it.”

Johnston said repairs the city is making to sewage lines and manholes are needed and will be beneficial, but the problems at the old spray field still need attention.

“While they are trying to do all of these upgrades, there are still issues out here.”

While livestock and vegetation depend on the creeks affected by the leak, Johnston said his primary concern is the health of people in the area.

“If you had children out there, it could make them very sick,” Johnston said. “Unfortunately there are families right here, in the surrounding area,” Johnston said. “And eventually this kind of thing will affect human health.”

Eaton said he understands why the city cannot build a top-of-the-line sewage treatment system, but said there is a way the city could have taken action.

“I understand money is a problem for us, but they could take it further away from the city,” said Eaton, who is a member of the Black Belt Citizens for Health and Justice. “With the soil conditions out here, this new spray field could be nothing but a failure.”

Johnston said he hopes to be a voice for people affected by the leakage.

Officials from the city of Uniontown could not be reached for comment on Thursday.