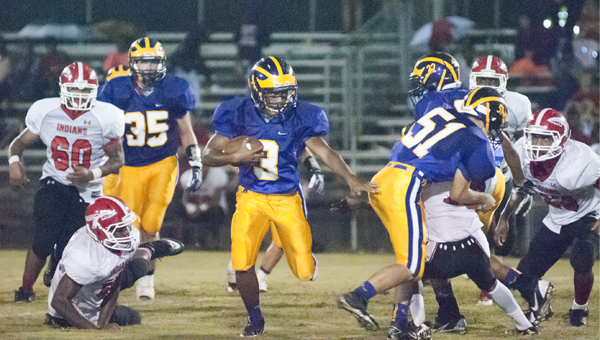 A strong ground game by Sweet Water helped the Bulldogs to a convincing and comfortable 54-6 win Friday over Southern Choctaw.

“We came out fast,” said Bulldog head coach Stacy Luker. “We felt like if we could get on them (we could win). They are a fast-starting team.”

Sweet Water scored first off a 45-yard run by Jakoby Aldridge to go up 6-0.

The Indians answered when Jordan Pope recovered a punt muffed by the Bulldogs. A few plays later, Keundric Leverett found the end zone on a 25-yard run to tie things.

That’s as close as the visitors would get.

Big runs by Aldridge, Demarcus Gamble, Daniel Sewell and others set the pace for the rest of the contest.

Gamble scored his first touchdown off a 1-yard rush late in the first quarter. A little later, Sewell found pay dirt from 23 yards out to put Sweet Water up 19-6.

Gamble then blocked a punt that eventually set up his second TD, a 22-yard dash with 8:12 to go before the break.

Southern Choctaw continued to have a hard time fielding kicks in the weather, dropping the ensuing kickoff, which was recovered by Kyle Patterson.

By the break, Sweet Water had amassed 341 rushing yards, compared to just 53 for Southern Choctaw (only 4 in the second quarter).

“Our backs looked explosive,” Luker said, giving credit to his offensive line too for their work.

Quarters in the second half were shortened to eight minutes. The Bulldogs added one touchdown, a 37-yard rush by Eric Jenkins to cap scoring at 54-6.