The team battled hard all day to bring home the championship trophy. They played four games with just 15-minute breaks in between each game. Team Synergy went 3-1 for the tournament.

The first game was against the Montgomery Rebels, and it was the only loss of the day with a final score of 8-7. 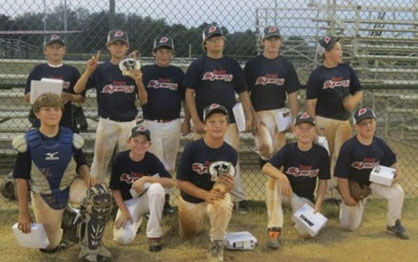 The next game was against the Opelika Big Dogs and Team Synergy had hot bats, which propelled them to a 12-2 win.

The third game was a battle again against the Opelika Big Dogs where the game went into 5 tie-breakers. Team Synergy finally broke the tie with the final score being 9-8.

After the win, Team Synergy faced the Montgomery Rebels in the championship game. That game also went into extra innings, and Synergy pulled it out as well, winning the game 9-7.

This was the first tournament in which Team Synergy has played together.

Head coach Ronnie Cox said every single player on the team contributed to help the team win the championship.

He added that he is very proud of the players for playing as a team and always encouraging each other when someone made an error or struck out.