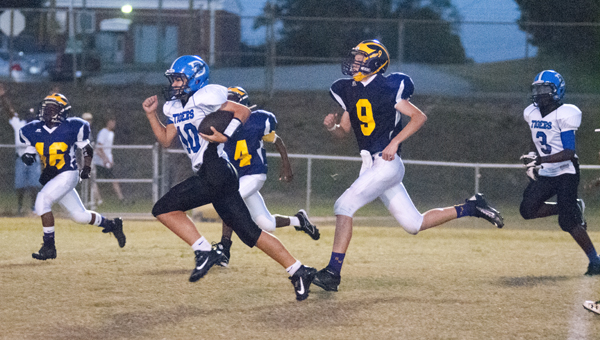 The Tigers got off to a fast start and never looked back as they downed the Bulldogs 36-0.

Demopolis started the game fast, and scored their first touchdown only a minute and a half into the game. Anthony Jackson took a handoff 60 yards to pay dirt for the first score of the night. The two-point conversion was good and the Tigers led 8-0.

The Tigers’ next score came on an 80-yard touchdown run by Demetrius Davis, and after another successful two-point conversion, DMS led 16-0.

In the second quarter, the only score came as time expired, this time on an 80-yard run by Xavier Jowers of Demopolis. The Tigers took a 24-0 lead into halftime following the two-point conversion.

In the third quarter, Tigers defensive back Shakari Williams intercepted a pass and returned it to the endzone, but the score was called back after a block in the back penalty. A couple of plays later, though, the Tigers got in the endzone on a 35-yard run by Russ Logan to put the Tigers on top 30-0. 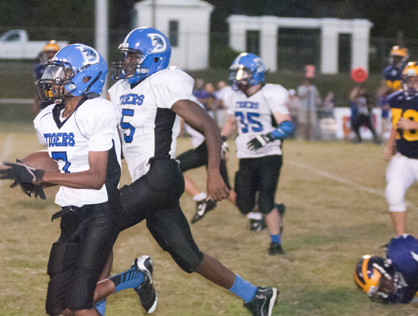 Shakari Williams intercepted a pass in the third quarter of Monday’s game against Sweet Water.

The final score of the night came with 5:37 to play in the game when Derrick Birl took a handoff 40 yards for a score.

“We saw some things tonight that can make us better,” DMS head coach Jeremy Silcox said. “We made some mistakes, but we can correct them.”

He added that, going forward, he and the coaches need to stress paying attention to detail and not worrying about the future.

“We just need to worry about what we are doing at that moment,” he said.

The Tigers’s next game will be Tuesday, Oct. 1 on the road at Selma.