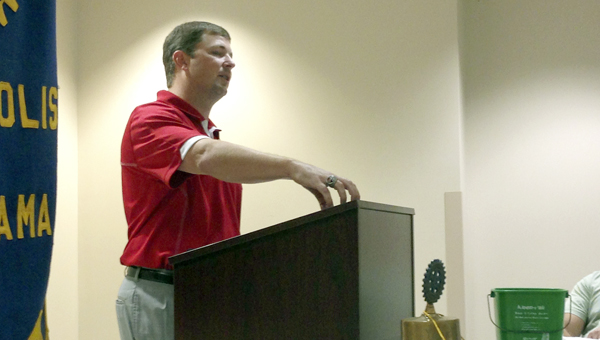 UWA head coach Will Hall spoke to the Demopolis Rotary Club on Wednesday.

University of West Alabama head football coach Will Hall spoke to the Demopolis Rotary Club on Wednesday about his program and what they are building toward.

Hall said he feels that UWA is on the verge of having a tremendous football program.

UWA plays in the NCAA Division II Gulf South Conference, where they won the outright conference championship for the first time in 2012.

This season, the Tigers are 2-1 to open their 2013 campaign, with their only loss coming in the final minutes to NCAA Division I opponent McNeese State.

Football fans in Demopolis will have a chance Thursday to see the Tigers in action as Demopolis High School will host a game between UWA and Concordia College at 6 p.m.

Hall is in his third season as head coach of the Tigers, and in each of his first two seasons, his team reached the Division II playoffs. Last season, the Tigers lost to the eventual Division II champion in Valdosta Stat, a team they beat in the regular season.

“We’re headed to a place that not many people thought we could get to,” Hall said. “We’re getting great support, and we need Demopolis.”

Hall added that UWA led the Gulf South Conference in Academic All-Americans last season, and many of his players are SEC-caliber players that are not at those schools for different reasons.

“A lot of our kids could play at SEC schools, but they aren’t there for some reason or another,” he said. “They might be an inch or two too short, or fell short academically.”

He also said that, when recruiting, he and his staff identify players at junior colleges in Mississippi and high schools in Alabama.

Hall said that the team’s motto, “Attitude Is Everything,” he feels like UWA is well on its way to building a strong program.