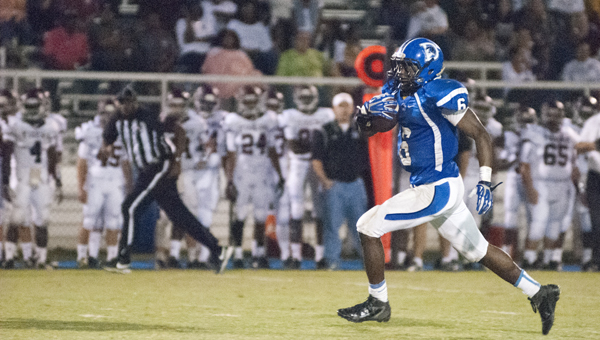 Roderick Davis runs for a touchdown Friday night against Thomasville. He had 12 carries for 244 yards and three touchdowns in the game.

This year’s edition of the Battle of the Tigers went to Demopolis in a 49-16 blowout win.

Thomasville couldn’t find an answer for Demopolis as the game progressed, and the home team earned a big win over the non-region rival.

“It’s always good to win in this rivalry,” Demopolis head coach Tom Causey said. “We’ve had losses like this in this rivalry since I’ve been here, so it was good to be on this end of it. They do a great job preparing their kids, so this was a good win.”

Demopolis started the game with a couple mistakes that put the defense in tough positions early. Dana Lockhart of Thomasville returned the opening kick down to the Demopolis 16-yard line, but Demopolis’ defense held the visitors to a field goal. 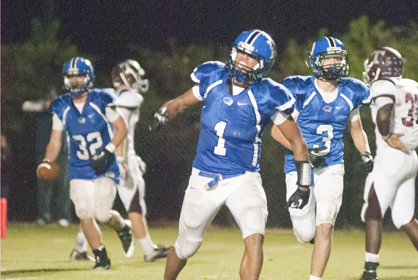 Later in the first quarter, Tyler Oates fumbled while trying to scramble and Thomasville recovered and took it down to the Demopolis 2-yard line. Zavier Mapp scored on a 2-yard run, but the extra point was no good, and Thomasville led 9-0.

“We had a couple mistakes early that gave them good field position, but we were playing well,” Causey said.

On the first play of the next drive, Roderick Davis took a handoff 81 yards for a touchdown to bring Demopolis back within two points. At the end of the first quarter, Thomasville led 9-7. 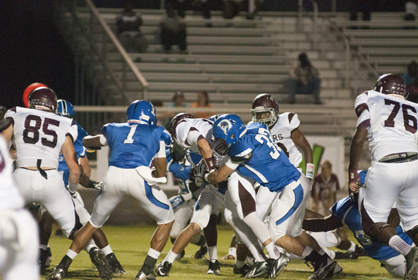 Peyton Pearson makes a tackle early in the game.

About midway through the second quarter, a low snap on a punt for Thomasville gave Demopolis the ball at the Thomasville 13-yard line, and Davis capitalized on the first play of the drive for a 13-yard TD run. After Leif Midgorden’s PAT, Demopolis led 14-9.

On Thomasville’s next drive, Demopolis forced a three-and-out, and on the punt attempt, Demetrius Kemp got through the line for the block to give Demopolis the ball at the THS 7 yard line. Tyler Oates completed a 7-yard pass to Drew Jones for a touchdown to give Demopolis a 21-9 lead.

Just before halftime, Davis scored his third TD of the night, this time from 90 yards out. This score gave Demopolis a 28-9 lead at the half.

“The O-line opened holes for Roderick to run through, and the receivers did a great job blocking down field,” Causey said. “On the 90-yard run before the half, Cortez Lewis busted it down the field and made a great block. That’s a team effort.”

Demopolis didn’t take their foot off the gas in the second half, and they scored early on a 35-yard touchdown pass from Oates to Kemp. The home Tigers led 35-9 at the end of the third quarter. 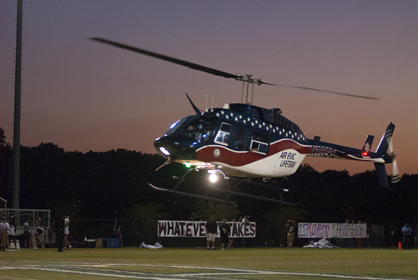 Oates and Kemp connected again early in the fourth quarter, this time from 73 yards out, to put Demopolis on top 42-9.

Demopolis’ final score of the night came on a 33-yard run by backup quarterback Tripp Perry.

Thomasville scored late in the game on a 1-yard TD run by Mapp to make the score 49-16.

“This was a good team win,” Causey said. “We still aren’t where we want to be with that, but we’re closer than we were last week.”

Demopolis finished with 356 yards rushing on 26 carries, and 488 yards total. 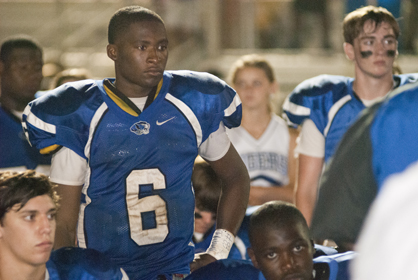 Roderick Davis after the game.

Davis had 12 carries for 244 yards and three touchdowns, and Kemp had two receptions for 108 yards and two touchdowns.

Next week, Demopolis will return to region play as they host the Greenville Tigers.