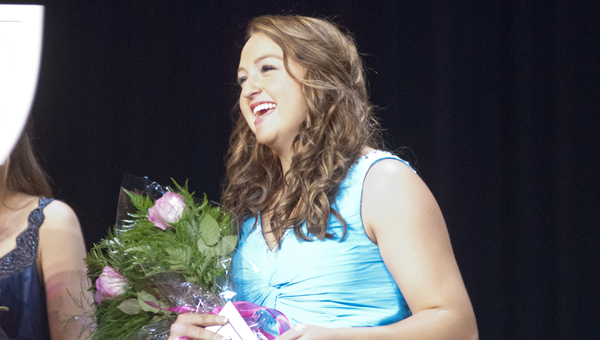 Emily Thompson reacts to being named the 2014 Distinguished Young Woman of Marengo County.

Thompson is the daughter of Michael and Kim Thompson and was sponsored by Whatley Timber.

In addition to winning the overall title, she also won the evening’s self-expression, talent and physical fitness portions and will take home $3,750 in scholarship money. 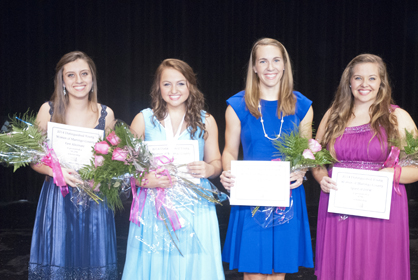 First alternate was Rachel England, who also won the scholastic achievement part of the scholarship program.

Second alternate was Riley King, and Baleigh Grace won the Spirit of Distinguished Young Women award, which is voted on by the candidates.

England, King and Grace are all students at Demopolis High School and took home $2,000, $1,000 and $750 in scholarship money, respectively.

For talent, Thompson sung “I Just Want to be a Star” from “Nunsense.” 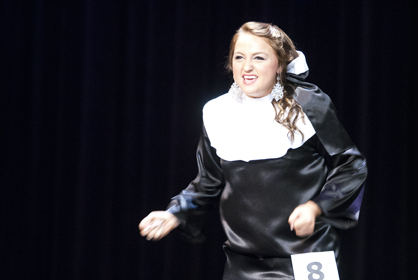 Emily Thompson sings “I Just Want to be a Star” from “Nunsense” for her talent.

She will go on to represent Marengo County in the state competition next year in Montgomery.

Thompson’s college choice is Mississippi State University. She wants to be a child psychologist and worship leader.

At Sweet Water, she is cheerleader captain, co-editor of the yearbook and a member of the Beta Club and Fellowship of Christian Athletes.

Other candidates in the program were Ali Cristwell of Demopolis High and Chynna Ernest, Andrea Landrum and Shelby Thompson, all students at Sweet Water High School.