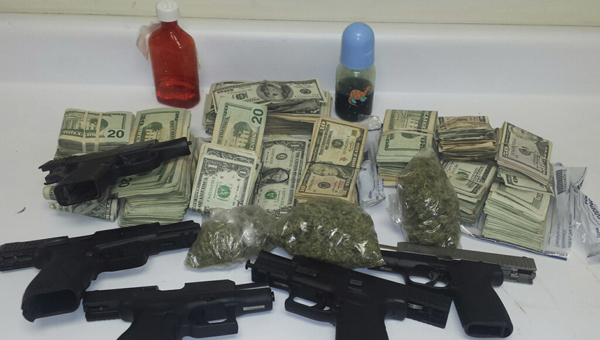 For the second time in less than a week, the 17th Judicial Drug Task Force made a drug seizure during a traffic stop. The latest stop happened late Friday night.

Agents of the Task Force seized 100 grams of marijuana, five pistols, codeine and almost $32,000 in cash after making a stop on Interstate 20/59 in Greene County.

Robert Lee Jackson, 33, and Kendrick Jermaine Williams, 39, were arrested and taken to the Greene County jail.

The guns seized were a Glock .40 caliber, a Kahr .40, a Springfield Armory XD .45, a Kel-tec 9 millimeter and a Taurus 9 millimeter. Jackson claimed four of the firearms, and Williams claimed one, authorities said.

“We put in long hours, and when we make a good seizure or a big case, it really makes it worth our while,” Task Force Commander Clint Sumlin said. “We have dangerous people coming through our area and stopping in our towns, and by making these stops, we are preventing the drugs from getting to the bigger hubs for distribution.”

Sumlin said the two men arrested were transporting the drugs from New Orleans to Atlanta.

The 17th Judicial Drug Task Force was started by District Attorney Greg Griggers in 2011. In addition to traffic enforcement, the Task Force also does undercover operations to stop drug trafficking and distribution in Marengo, Sumter and Greene counties.

The Greene County Sheriff’s Department and Eutaw Police Department were also on the scene for the stop.