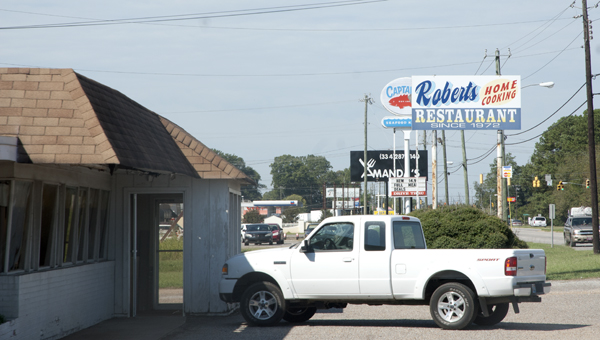 Roberts’ Family Restaurant, open in Demopolis for nearly 41 years, closed as of the end of September.

Mark and Sabrina Harrell, owners of Roberts’ Family Restaurant, will no longer be serving their famous home cooking.

Roberts’, a staple in Demopolis since 1972, closed its doors as of the end of September due to a struggling economy.

“Even though Demopolis appears to be growing,” Sabrina said, “the customer base has stayed the same. There are many more restaurants for people to choose from, there just aren’t more people.”

“My mother has worked here since the beginning,” Sabrina said. “I’ve come and gone over the years, but it’s been a part of my family. The customers are more than just customers – they’re family.”

She said the most difficult part about closing has been telling the customers that have been coming to the restaurant for so many years.

“It’s been difficult. We’ve watched kids grow up here, and we’ve seen them have children and watched them grow,” she said. “We enjoyed it all. It’s been very rewarding for us.”

She added that they were forced to make a quick decision about closing or not, because it was getting close to time for them to renew their licenses and buy new insurance.

“We had to decide what we were going to do,” she said. “I think we could have made it through the end of the year, but the first of the year is always a slow time for us, and it would have been hard to make it through it. We want to get out before we are in the red. You have to know when to hold them and when to fold them.”

She said she and Mark hope to stay in Demopolis.

“We just want to thank all of our loyal customers for their support over the years,” Sabrina said. “We’ve enjoyed being here over the years.”