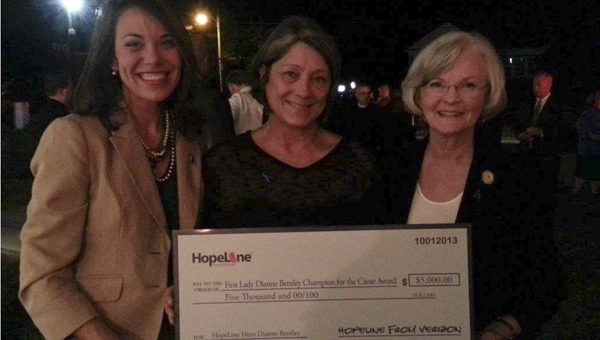 Harriet’s House received two grants from the Verizon Foundation on Tuesday night during a ceremony in Montgomery.

The night brought together dozens of advocates, law enforcement officers and victim support workers for an event honoring victims and energizing those who provide support and prevention services.

As part of the announcement, a $5,000 HopeLine from Verizon grant was awarded to Harriet’s House in Demopolis for their efforts to raise citywide awareness with purple ribbons placed throughout downtown Demopolis.

This was the first of what will become the annual “First Lady Dianne Bentley Champion for the Cause Award,” to be presented each October to an Alabama non-profit organization doing innovative work around the cause of domestic violence awareness.

“For us, this grant means cash flow, which is something we haven’t had much of since the economy turned several years ago,” said Susanna Smith Naisbett, executive director of Harriet’s House. “Cash flow has been a huge issue for us because we’ve seen about an 80 percent drop in donations over the last few years.”

Naisbett added that this grant is soft money, so it can be used as match money for future grants from ADECA, which require a 20 percent match.

Verizon’s HopeLine program turns no-longer-used wireless phones and accessories into support for domestic violence victims and survivors. Verizon named First Lady Bentley a HopeLine Hero in 2012 after she led a drive to collect 2,500 phones in just 30 days. Since that initial drive, her work has generated donations exceeding 7,000 phones.

The other grant Harriet’s House received from Verizon was for $10,000, and its use is specifically for the “Code Purple” project.

The money will be used for training for some employees as well as materials and advertising for the campaign.

“I’m just really excited and thrilled,” Naisbett said. “This is a huge relief.”