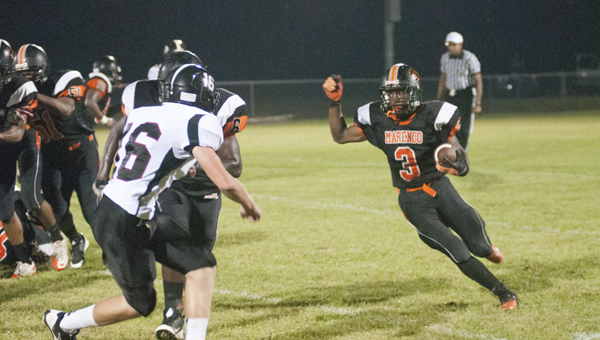 The Marengo Panthers were able to cut a 20-point halftime deficit to four points in the second half before falling to St. Luke’s 44-32.

St. Luke’s jumped out ahead early, and Marengo was never able take the lead in the game.

“We just have to minimize our mistakes,” Marengo head coach Drederick Bell said. “We stopped ourselves a lot tonight.”

St. Luke’s opened the scoring with a three-yard touchdown run by Kesonn-Tyler Bettis. The extra point attempt was blocked Michael Lewis, and the Panthers trailed 6-0.

Marengo wasn’t able to get anything going on their first drive of the night, and St. Luke’s took advantage on good field position on their second drive. A two-yard touchdown run by Bettis put them on top 12-0 after the two-point conversion failed. 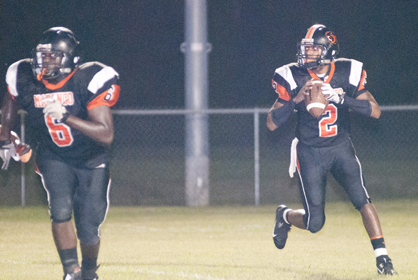 Marengo didn’t waste any time getting that score back, though, on an 80-yard kickoff return for a touchdown by Michael Kennedy. Shamerian Lewis ran for the two-point conversion, and the Panthers trailed 12-8 with 2:34 to play in the first quarter.

St. Luke’s scored on the first play of the second quarter after driving down the field. The score came on a 15-yard pass from Michael Phillips to John Favors to take a 20-8 lead.

A fumbled snap on fourth-and-one on Marengo’s next drive gave St. Luke’s possession near midfield, and they scored on a four-yard touchdown run by Phillips to take a 28-8 lead.

Marengo was able to answer with an 86-yard drive and a seven-yard touchdown run by Michael Lewis. Jatevin Horn scored the two-point conversion, making the score 28-16.

With 48 seconds left in the half, St. Luke’s added another score on a 14-yard pass from Phillips to Favors to make the halftime score 36-16.

Marengo came out fighting in the second half and scored twice in the third quarter to put the pressure on the visitors.

The Panthers got the ball to start the half and drove down the field to score on a one-yard run by Michael Lewis to bring Marengo back within striking distance at 36-24.

Marengo forced a punt on the next drive, and took over at their own four yard line. Michael Lewis scored on a 72-yard run to bring the Panthers within four at 36-32.

St. Luke’s drove the ball down the field on their next drive, but the Panthers defense stood strong inside their own 10 yard line to give their offense the ball at their own secen yard line.

The Panthers went four-and-out, and St. Luke’s capitalized on the short field on a 17-yard touchdown pass from Phillips to Favors to put them up 44-32.

“We condition in practice every day, and there isn’t a team we’ll play that will be in better shape than us,” Bell said. “We just can’t shoot ourselves in the foot.”

With the loss, the Panthers drop to 4-2 overall and 3-1 in the region. They will travel to Linden to take on the Patriots next Thursday night.