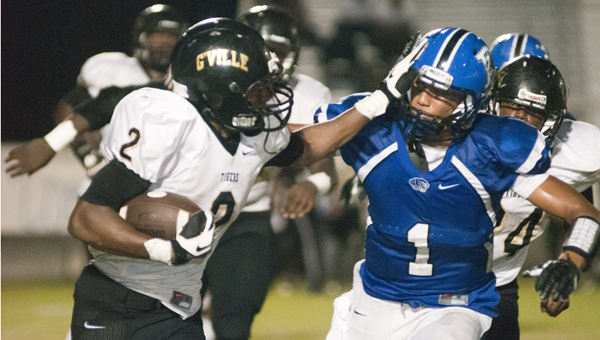 Demopolis senior safety Demetrius Kemp comes in to make a tackle on Greenville’s Alyric Posey. Kemp led Demopolis in tackles with 11 total. He also had an interception.

The Greenville Tigers traveled to Demopolis for a Class 5A, Region 3 rivalry game, and the visiting Tigers came away with an 18-16 win.

Demopolis had their chances as the game came to a close, but the Greenville defense held just enough to secure the victory.

Greenville received the ball to open the game, but Demopolis forced a punt after a bad snap put Greenville in a long distance situation.

Demopolis capitalized on their first drive after starting from their own 13 yard line. Roderick Davis capped off the 87-yard drive with a two-yard touchdown run to put the home team on top 7-0.

On the ensuing kickoff, Michael Smith returned the kickoff 90 yards for Greenville down to the Demopolis 7 yard line. Two plays later, Alyric Posey got into the endzone on a three-yard run. Winston Simms missed the extra point, and Demopolis led 7-6 with 6:33 to play in the opening quarter. 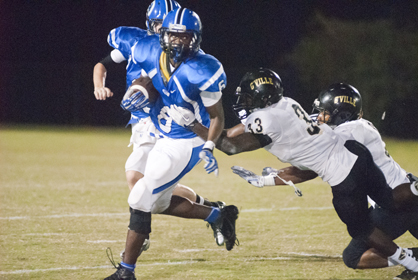 Roderick Davis sheds a tackle and looks up field for extra yards.

Greenville forced a Demopolis punt on the next drive and took over at their own 19 for their next drive.

The visiting Tigers were able to drive 81 yards down the field on a drive capped off by a one-yard touchdown run by Jerome Watkins. The Tigers failed the two-point conversion and led Demopolis 12-7 as the first quarter drew to a close.

The two teams traded possessions through the second quarter until Demetrius Kemp intercepted a Greenville pass and returned it to the Greenville 40.

Demopolis got to the Greenville 18 yard line, and a roughing the passer penalty put the home team on the 9 with a first-and-goal. On third-and-goal from the 2, Davis scored his second touchdown of the night to put his team on top 14-12 with 33 seconds to play in the half.

Greenville took a knee to go into halftime trailing by two.

Neither team was able to cross the goal line in the third quarter as they traded possessions and field position. 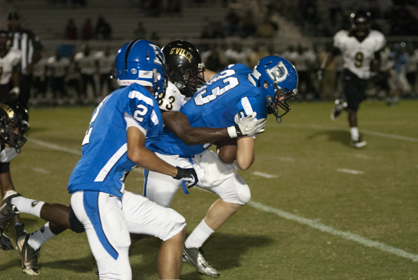 Early in the third quarter, Kemp fumbled after making a reception and Greenville recovered at their own 39 yard line.

Greenville drove down to the Demopolis 23, but the defense stood strong to force a fourth-and-12 from the 25. Greenville lobbed a pass to the endzone that was intercepted by Kemp, but pass interference was called on Tyler Perkins, giving Greenville an automatic first down at the 10 yard line. On the next play, Greenville quarterback Draylen McGrew scored on a quarterback keeper. The two-point conversion failed, and Greenville led 18-14 with 6:23 remaining in the game.

Demopolis took over and began moving the ball into Greenville territory as time was running down. Greenville forced Demopolis into a fourth-and-14 situation, but Tyler Oates’ pass was intercepted at the 3 yard line by DeBryant Crenshaw with under three minutes to play.

On third-and-10 from the 3, Hollis Bright exploded through the Greenville offensive line for a sack and a safety to bring Demopolis within two at 18-16. 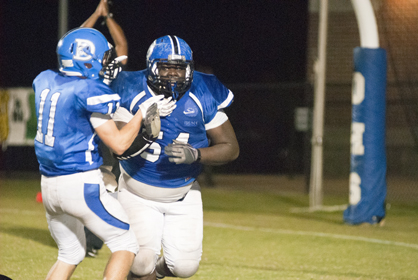 Demopolis defensive tackle Hollis Bright celebrates after forcing a safety late in the fourth quarter to give Demopolis another chance to win the game.

Greenville kicked off to Demopolis and Kemp returned the kickoff to the Greenville 47 yard line. Tyler Oates opened the drive with a throw downfield to Dayvon Branch, and the Greenville defender was called for pass interference to set Demopolis up with a first-and-10 from the 27. Three consecutive incomplete passes brought up fourth-and-10, and Demopolis kicker Leif Midgorden trotted out onto the field for a 44-yard field goal attempt. His kick fell just five yards short, sealing the loss for Demopolis.

For Demopolis, Davis led the way on the ground with 26 carries for 136 yards. Defensively, Kemp had 11 total tackles and an interception.

Demopolis outgained Greenville by 95 yards in the game, but had two more turnovers than the visiting Tigers.