Marengo County Commissioner Dan England recently joined an elite group of county officials by completing 50 hours of education from the Alabama Local Government Training Institute on the basic responsibilities of the county commission. 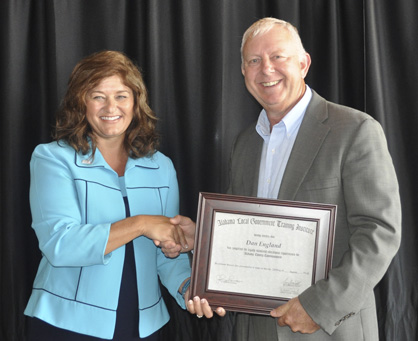 Debbie Wood, president of the Association of County Commissions of Alabama, congratulates Commissioner Dan England on his graduation from the Alabama Local Government Training Institute.

He was first elected in 2012 and has graduated from ALGTI in less than a year, which is his earliest opportunity.

The program emphasizes budgeting, personnel matters, planning, and road and bridge responsibilities. This educational program began in 1994 as a mandatory program for first-time county commissioners by act of the Alabama Legislature. It is a joint effort between the Association of County Commissions of Alabama and Auburn University.

“No matter how much experience you bring with you, county government is highly specialized, so new commissioners find they have much to learn,” said Sonny Brasfield, ACCA executive director. “We are especially proud of the commissioners who were first elected in 2012 who have made their education a top priority. They wasted no time and should be commended for their dedication to their county responsibilities.”