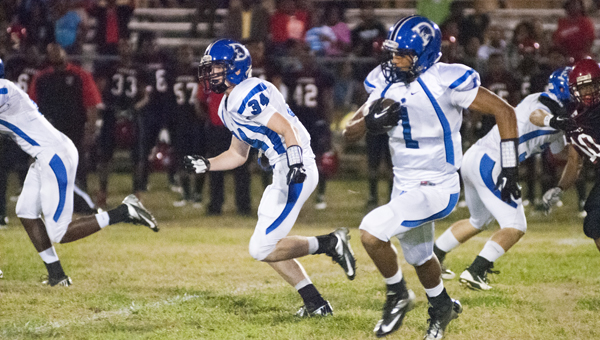 Demetrius Kemp returned the opening kickoff of the night for an 87-yard touchdown. The Tigers went on to defeat Sumter Central 42-9.

The Demopolis Tigers traveled to Livingston on Friday night to take on the Sumter Central Jaguars and came away with a 42-9 win.

The game saw 30 penalty flags thrown, and both teams had their share of mental mishaps. The Tigers were too much for the Jaguars when it came down to it, though, and they came away with the region win.

“We still have a long way to go,” Demopolis head coach Tom Causey said. “We’ve still got a lot of things to get better at. We have to keep working on the little things, because that’s what’s killing us right now.” 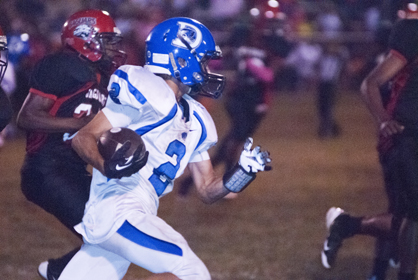 Ryan Schroeder returns a punt for 73 yards and a touchdown.

Demopolis opened the game with a bang on an 87-yard kickoff return for a touchdown by Demetrius Kemp on the opening kickoff to put Demopolis on top 7-0. The Tigers defense was strong all night, but early in the game, the Demopolis offense struggled.

Due in large part to some bad snaps, the Tigers put themselves in holes on offense that they couldn’t climb out of.

As time expired in the first quarter, Demopolis quarterback Tyler Oates took a quarterback keeper to the endzone from 21 yards out to put Demopolis on top 14-0. 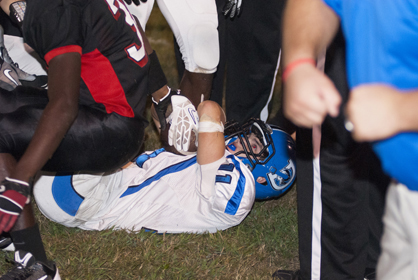 Ryan Schroeder returned a punt for a touchdown late in the second quarter from 73 yards out. Dayvon Branch ran in the two-point conversion to give Demopolis a 22-0 lead.

The Tigers defense forced a Jaguars punt on the next drive, and Drew Jones got in the backfield for a blocked punt. Oates connected with Kemp on a 27-yard pass for a touchdown to give Demopolis a 35-0 lead going into the half.

The final score for the Tigers came early in the third quarter on a 9-yard run by Davis. This put Demopolis on top 42-0, and the starters were done for the night. 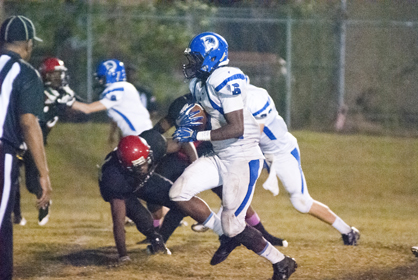 Roderick Davis looks for a hole against Sumter Central.

Sumter Central quarterback Markeous McGraw threw a 44-yard touchdown pass to get his team on the board late in the third quarter.

In the fourth quarter, the Jaguars started a drive at their own 1-yard line and drove down to the Demopolis 1-yard line before fumbling and giving the Tigers possession. A high snap to McVay forced a safety, though, which resulted in the final score of the game, making the score 42-9.

“We’re just looking for somebody to be consistent,” Causey said. “There’s nothing I can do to fix it when a player goes from good to bad to good to bad.”