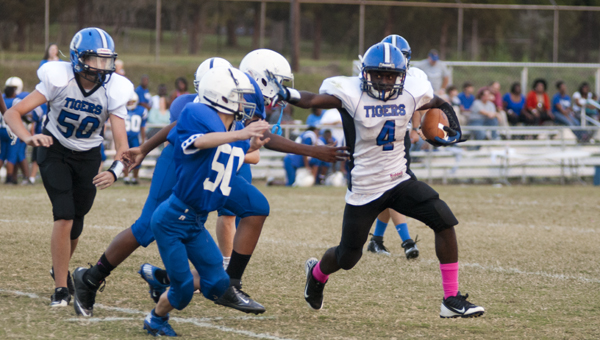 The Tigers will host the Highway 43 Championship next Monday at Demopolis High School. Their opponent is not yet known.

After falling behind 6-0 in the first quarter against Wilson Hall Middle, the Tigers get their offense going and never looked back.

With 5:09 to play in the first half, Anthony Jackson broke a 95-yard touchdown run to even the score. The two-point conversion was no good, and the score remained even at 6-6. 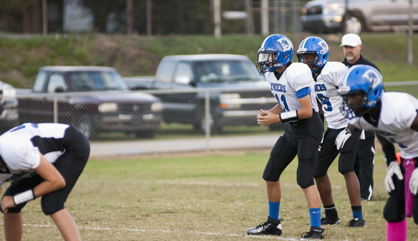 Andrew Patterson waits for a snap.

Wilson Hall Middle’s next possession ended abruptly after Derrick Birl stripped the ball from the quarterback and scooped the fumble and ran in for a touchdown from 20 yards out. Again, the Tigers missed the two-point conversion, but led 12-6 with 3:29 remaining in the half.

Russ Logan recovered a fumble for the Tigers on the next play from scrimmage, and with 1:49 to play before halftime, Jackson scored his second rushing touchdown of the night from 15 yards out. Andrew Patterson ran in the two-point conversion to put Demopolis on top 20-6, which held until halftime.

The Tigers opened the second half with the ball, and Jackson took another handoff into the endzone, this time for 55 yards. Patterson converted the two-point conversion to give Demopolis a 28-6 lead with 7:09 to play in the third quarter.

The final score of the game came late in the third quarter on a 50-yard run by Birl to put the Tigers on top 34-6. 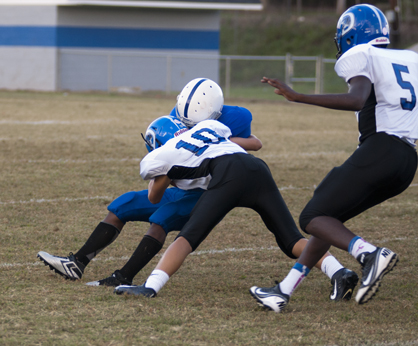 Russ Logan makes a tackle in the backfield for a loss.

Trey McKinley came up with a big sack for the Tigers as the third quarter came to an end, which gave the team momentum heading into the final quarter.

Wilson Hall Middle drove down inside the Demopolis 20 in the fourth quarter, but turned the ball over on downs to seal the win for Demopolis.

“We need to play like we should from the start,” head coach Jeremy Silcox said. “Getting this win means they have one more opponent to improve. Having something to play for next week will add a new level of intensity, which is something they need.”

Silcox added that, from the beginning of the season to the end, he has seen a lot of improvement from the team all around.